The personal presentation sword of Lieutenant-General Joshepus Jacobus van Geen (1775-1846) is one of a series made during the rural period of the Java War in 1825. The sword seems to be part of a small group of presentation swords, presented to the Dutch high society and ordered by Robert van der Capellen, brother of the Gouvernor-General of the Dutch East Indies Godert van der Capellen. Other known examples will be presented in this article.

To begin with the comprehensive military career of van Geen;
He started as a cadet in the Staten van Brabant in 1789 and became second Lieutenant in 1792. A year later, in 1793, he became first Lieutenant after suffering injuries from a strike to his head with a saber and hit by shrapnel. He became officer in the Bataafsche Republiek. When he marched to Dusseldorf in 1797, he was promoted to Captain. Later on, in French service he fulfilled an important role in the defense against the English and Russian invaders, yet again, injured by shrapnel.
In 1807 he was promoted to Lieutenant-Colonel after being captured by the British, he was swiftly released in a prisoner exchange and sent on a military campaign to Portugal. In Portugal he kept an important convoy out of enemy hands and was rewarded with the Legion d’Honeur, the highest and most important national French decoration.
in 1812 at the battle of Salamanca and Burgos, he rescued an important banner and was therefor decorated ‘Officer of the Legion of Honor’
After a short sickness of which he recovered he enlisted in the Dutch army in 1814 and was stationed in Namen, current day Belgium. in 1815, while he had not participated in the battle of Waterloo, he was stationed in Utrecht as Lieutenant-General and became commander of Utrecht and was decorated with the Knight of the Willems Orde, the most important decoration set by King Willem I.

In 1819, van Geen was detached to the Dutch East Indies together with his son Mattheus. He arrived in Java in 1820 and became commander of both Infantry and Artillery. He travelled through Java and Madura and learned the local culture and military performance.
In 1824 he was assigned to strike down the rebellions in Celebes and succeeded to subsequently quell them in January 1825 with a large number of infantry and cavalry accompanied by a large fleet. The Boni forces had a large number of cavalry, but after a rocket attack the cavalry forces panicked and dispersed. General van Geen ordered to attack the Bonian forces who fled in the mountains and in a few months the Bonian forces were surrounded and had to surrender. He succeeded to defeat the queen of Boni in June 1825 after several landings and battles.

In August of 1825, he landed in Sedayu and was ordered to move to Surabaya to quell the uprising of Diponegoro under supervision of General de Kock. He succeeded to quell the rebellion. It is in this period that he received this presentation sword, likely as present to thank him for his actions in Celebes and East-Java.
In 1826 he managed, as Deputy General, to fight successfully against the guerrilla attacks of the followers of Diponegoro. In December 1826, he was ordered to head back to his homeland, but before he was able to, he was send again to battle and in 1827 he was assigned to support the campaign to General de Kock. He was appointed Commander in the Military Willems Orde. Afterwards he left to Holland and became commander in Namen, current Belgium.

During the Belgium uprising in 1830 he went to Antwerp and later on to Breda, where he became commanding officer. He marched with King Willem I during the so called ‘ten-day campaign’ to Boutersem, where they were heavily bombarded and made large number of losses. In the end, under implacable pressure of the French, the Belgium uprising ended and General van Geen went back to Breda where he retired in 1841. He had been given the title of Baron in 1831.

All these types of presentation swords have one thing in common; they have their origin in the Preanger area of West Java. To be precise, the region of Bandung.
The type in general is called ‘Gobang Bandung’ a common type in West Java. They are known for it’s slightly curved blade and stylistic rattan bound scabbard. The Gobang is quite common in this region, but just a handful are known to be engraved and dated with the owners name.

Two comparable examples are held in Slot Zuylen (Netherlands), after they were returned after being stolen in the 1970’s. One engraved “Heer Van Zuijlen 1825, Tjiandjoer” – and on the reverse side: “Baron van  Tuyll van Serooskerken“.
The other: ”Baron C.E van Tuijll” and on the reverse side: ”van Seerooskerken, Tjiandjoer 1825”. Another example is held in the Asian Civilization Museum Singapore in similar style and decorated with a similar floral pattern; Engraved: ”R. vd Capellen” and on the reverse side: ”Tjiandjoer 1824”. Two more examples are known to be made for Carolus Ludovicus Blume, director of ‘ s Lands Plantentuin (The governmental botanical garden for study on indigenous botanical species). Both engraved ”C.L Blume” and ”Tjiandjoer 1824”.

The similarity of all these engraved swords is the same style horn hilt, wooden scabbard with horn fittings and fine braided rattan. Some examples slightly more decorated then others. The decoration on a fine example which we sold in 2019 has the comparable style and decoration, which was only engraved ”1825” surrounded in floral motifs. Showed here.

Our example shown here was also ordered as a gift, likely presented to General Van Geen when he arrived in Java after his successful campaign in Celebes.
These swords were made in Tjiandjoer (Cianjur) the town where Robert van der Capellen had his residence in 1825. It is likely that Van Geen crossed this region when he was ordered to travel further to Madura to assist General de Kock and his troops fighting against the rebellions lead by Diponegoro.
The blade is engraved ”J.J. Van Geen” and on the reverse side in Javanese, or likely Sundanese: ”Ana Naga 1241” which can be translated as ”Made in Naga, 1825”. Naga is a small village near Ciandjur which is likely the hometown of the maker that worked in Ciandjur and engraved the sword. 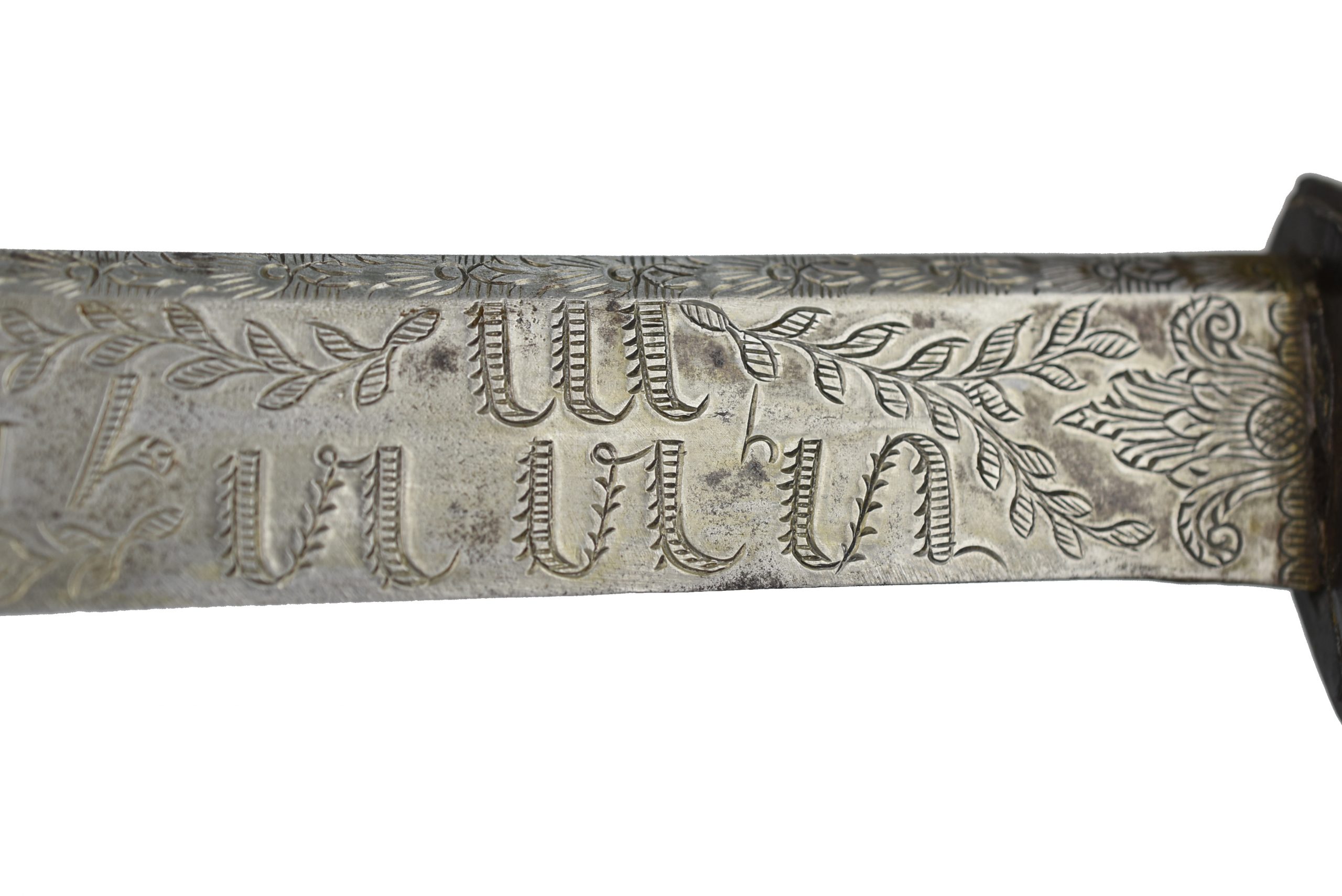 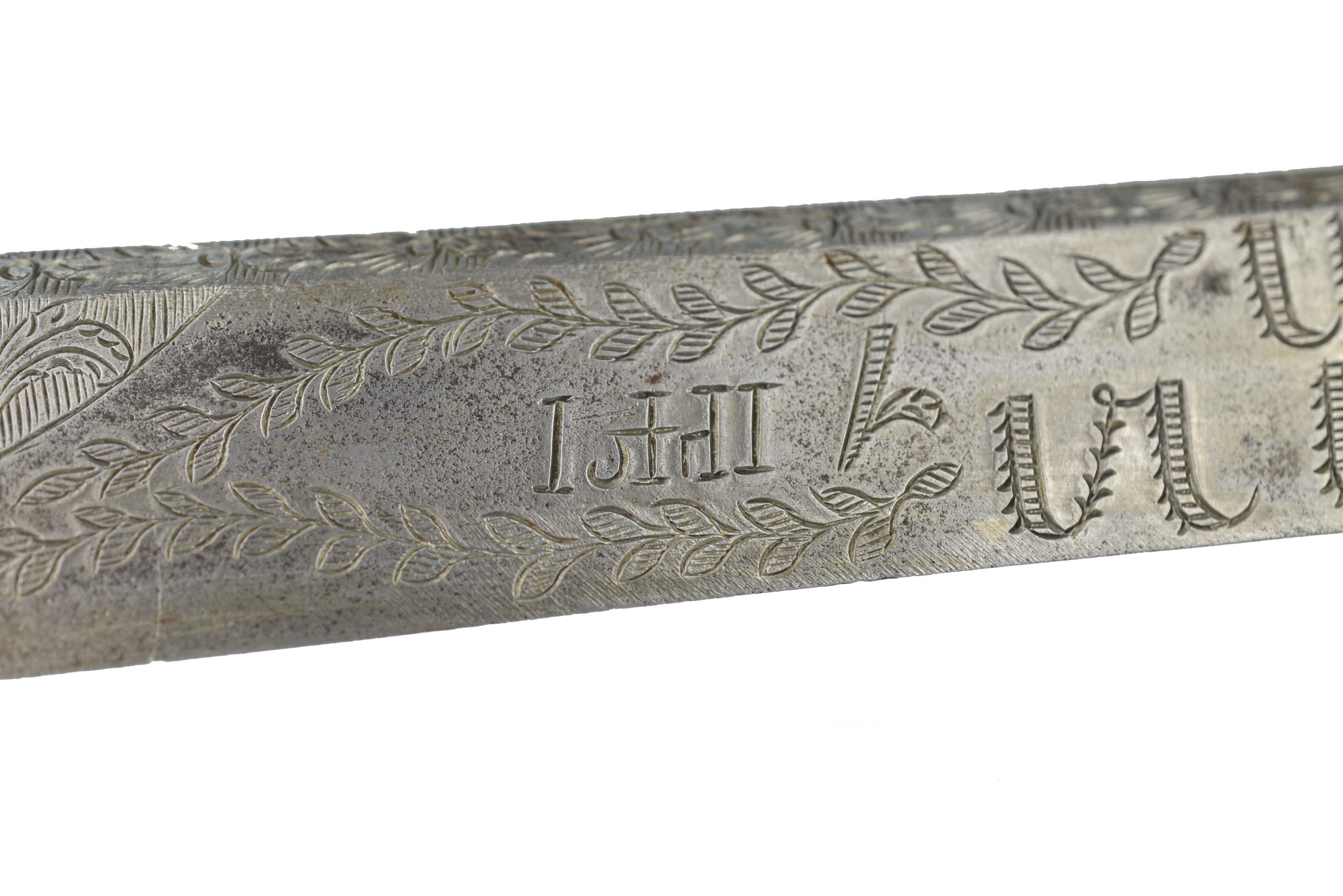 Like many other local swords, the gobang had multiple purposes. It was used for everyday chores, self defense and for hunting. The latter happened in large events. The locals organized large deer hunting parties with hunters on horseback without saddle hunting the deers, killing it with their swords. These hunts were very dangerous and many participants perished during the hunt. The spectators watched this in large pagoda-like stands that were specially built for this purpose. In 1870 the deer hunting events stopped, it seems they also stopped producing the gobang during this period. They likely ran out of fashion and use since they disappeared in the late 19th century.

Conclusion:
A very interesting sword which can be grouped under a very small, worldwide known series of presentation swords.
Once owned by Baron generaal van Geen who likely once watched a large deer hunt and had this sword presented by Godert van der Capellen. I hope some more swords of this type and quality will appear on the market in the future, which can link to this period and group of dignitaries who received a similar example.

Copyright by Peter Andeweg – Antiques by the Sea – 2020