The ‘Pattern 1816 Saw Back Rifleman’s sword’ was issued among rifle brigades in 1816 and replaced the former ‘Baker sword bayonet Pattern 1801’. The former Pattern 1801 bayonets were long and proved to influence the accuracy of the baker rifle when fixed on the barrel. The British army came with a solution in 1816 after the Napoleonic wars; a sword similar to the Pattern 1801, but meant as sidearm with saw back blade. The saw back blade had mislead us for many years being falsely described as pioneer or artillery sword. The new pattern was not really appreciated among the soldiers as Colonel Norcott of the 95th Rifles stated on the 1816 saw back pattern:

”As the bayonet has been lately substituted to fix on the rifle in place of the sword [he is referencing the socket bayonet], I would suggest that it be abolished altogether; the soldier has no use for both. It was always a preventive to his easy marching from the manner in which it was slung, and is very heavy. If it be said that it must be of use upon service in order to cut wood, or to hut, I can testify that the light division in Spain carried small felling axes, purchased by the captains for their men at the particular request of the latter, … and used them in preference to either sword or bill hook …indeed, I scarcely ever knew the soldier [to] use his sword, but for the purpose if dividing the meat, or for clearing ground to lay on.”  Col. Norcott – 95th Rifles.

Henry Osborn and John Gunby:
A total of 5.194 examples were made, and an unknown number was made by Osborn & Gunby who were officially appointed in 1802 as ‘Sword Cutlers to His Majesty’ and manufactured a large number of swords for the army during the reign of King George III. Henry Osborn had a factory in Birmingham and had his shop in 82 Pall Mall. In 1808 he corporated with John Gunby and they became officially partners. The Osborn and Gunby mark on the spine of this blade correspondents with their coöperation during this period.

Manufacture date: Based on the earlier design of the hilt assembly, we can date this sword to circa 1816 to 1820. Since Gunby had partnered Osborn in 1808, all swords after this date had the combined names of Osborn & Gunby set into the name shield or spine.

The hilt:
The casted brass hilt features a beak-nose lion head pommel with large D-guard in fashion of the Light Cavalry Pattern 1796 sabre. The hilt has a rounded thumb-rest and rounded langets. The D-shaped hand guard has a small recess to have a lanyard attached and the grip is made of solid bronze, shaped in a ribbed pattern to add a better grip. 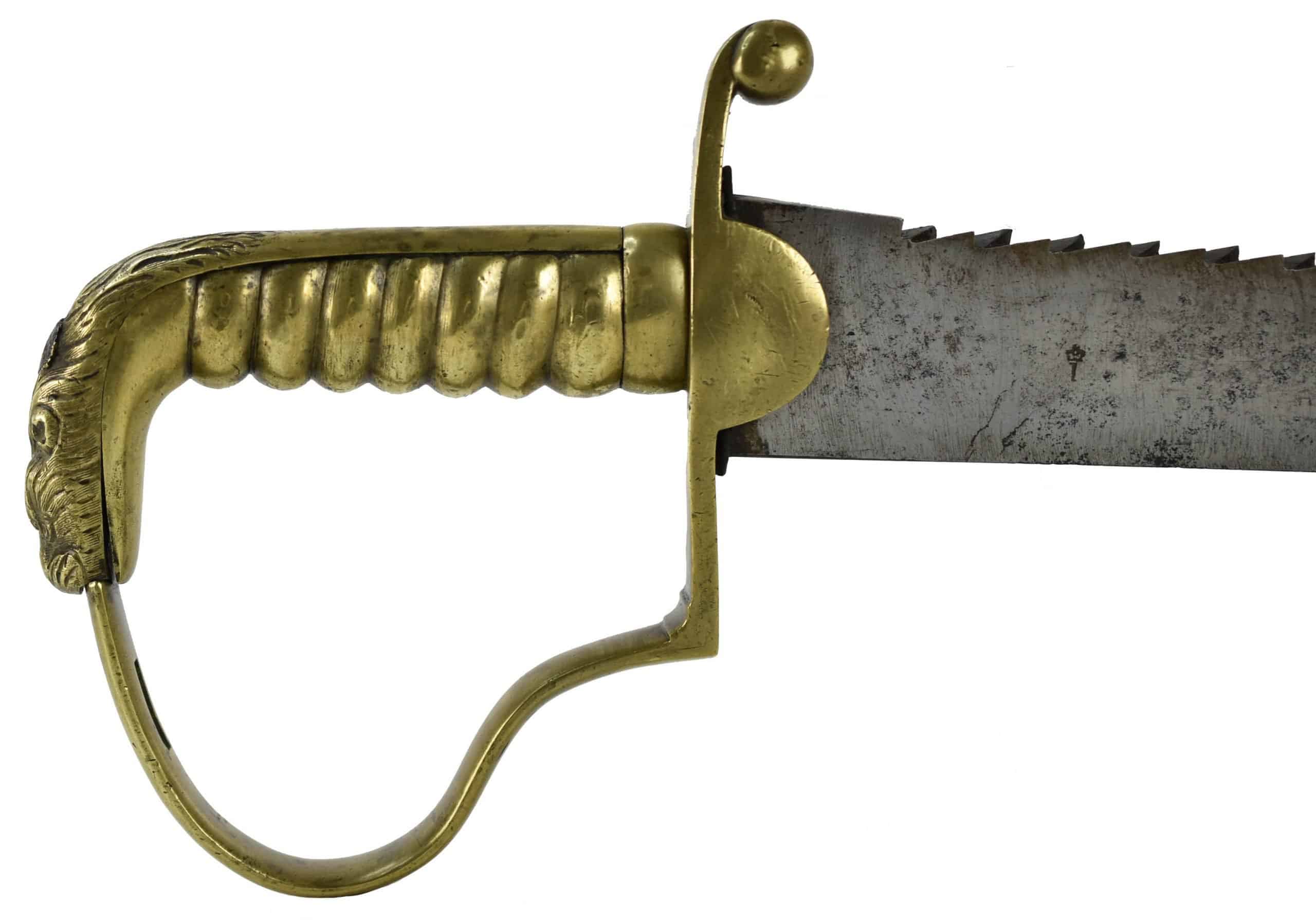 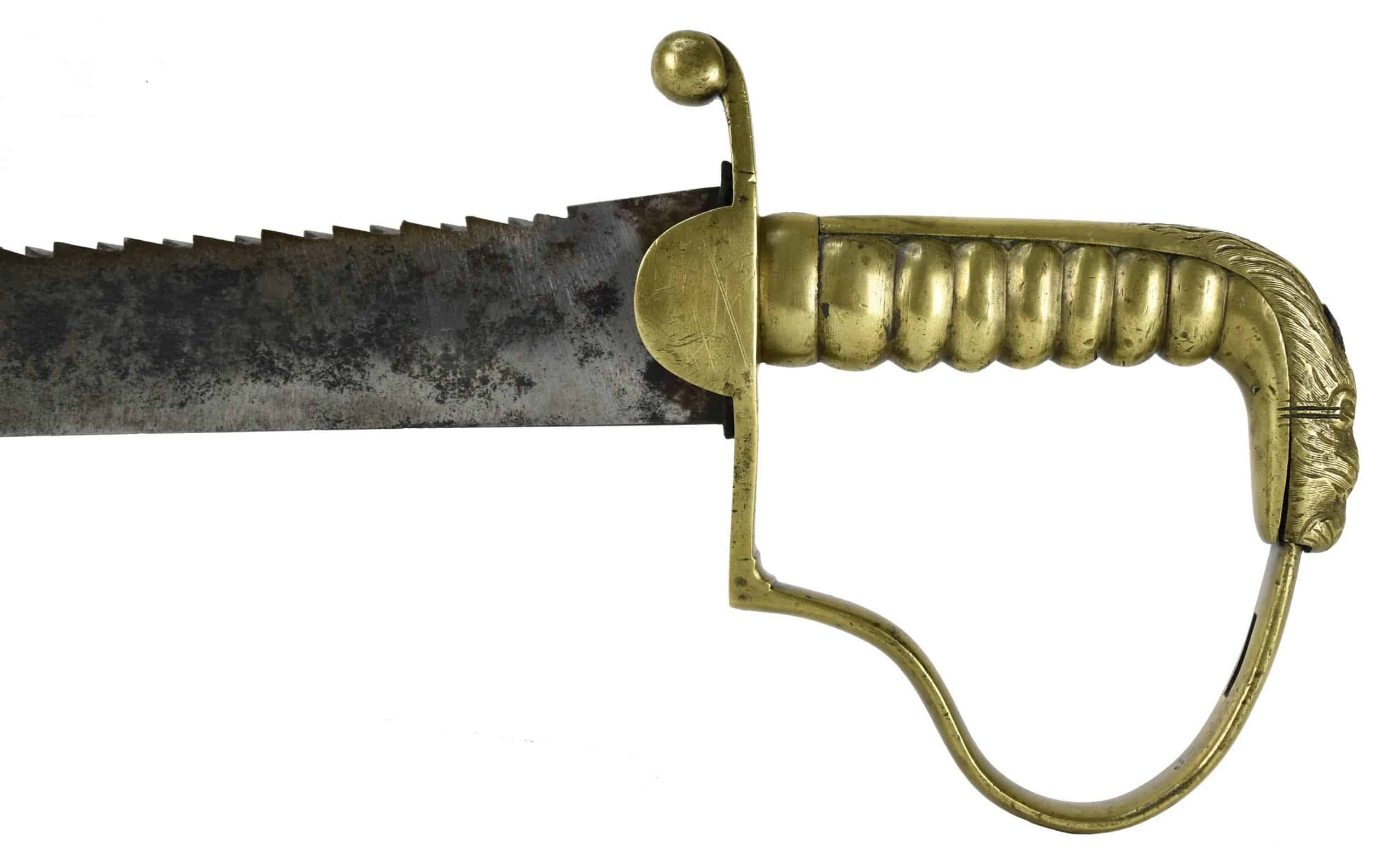 The blade:
Being considered a short sword with a rare saw back blade with clipped double edged tip. The blade is slightly curved and made of thick, hardened steel. The blade was proved with an inspection mark as can be seen above and below. The saw back is often miss attributed as pioneer or artillery sword, although this pattern was especially made for the Baker rifleman, yet one would not rule-out it was served for this purpose.

Condition: Very good condition, the blade suffered from cleaning and sharpening in the past, but is only scratched superficial. No scabbard. 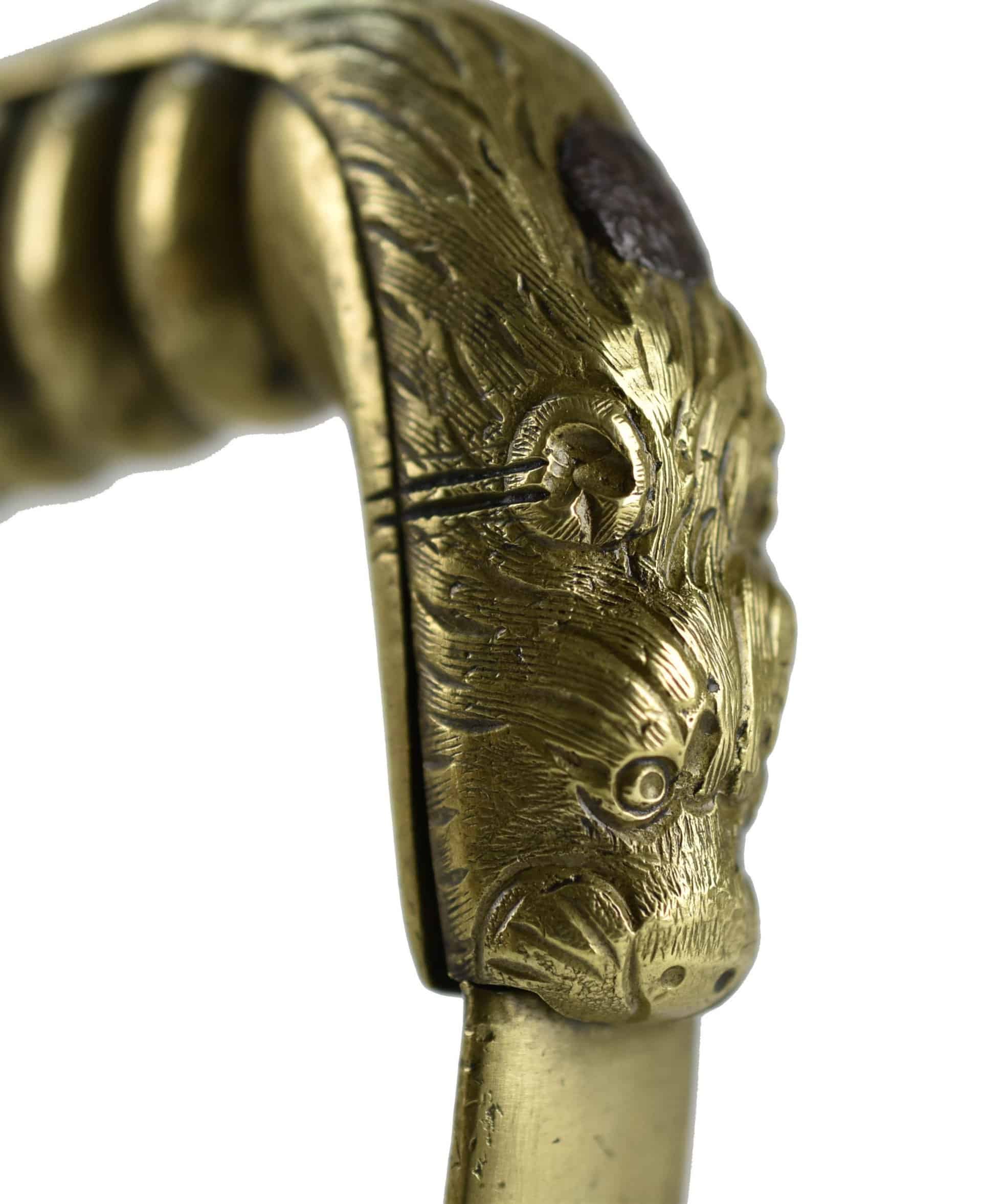 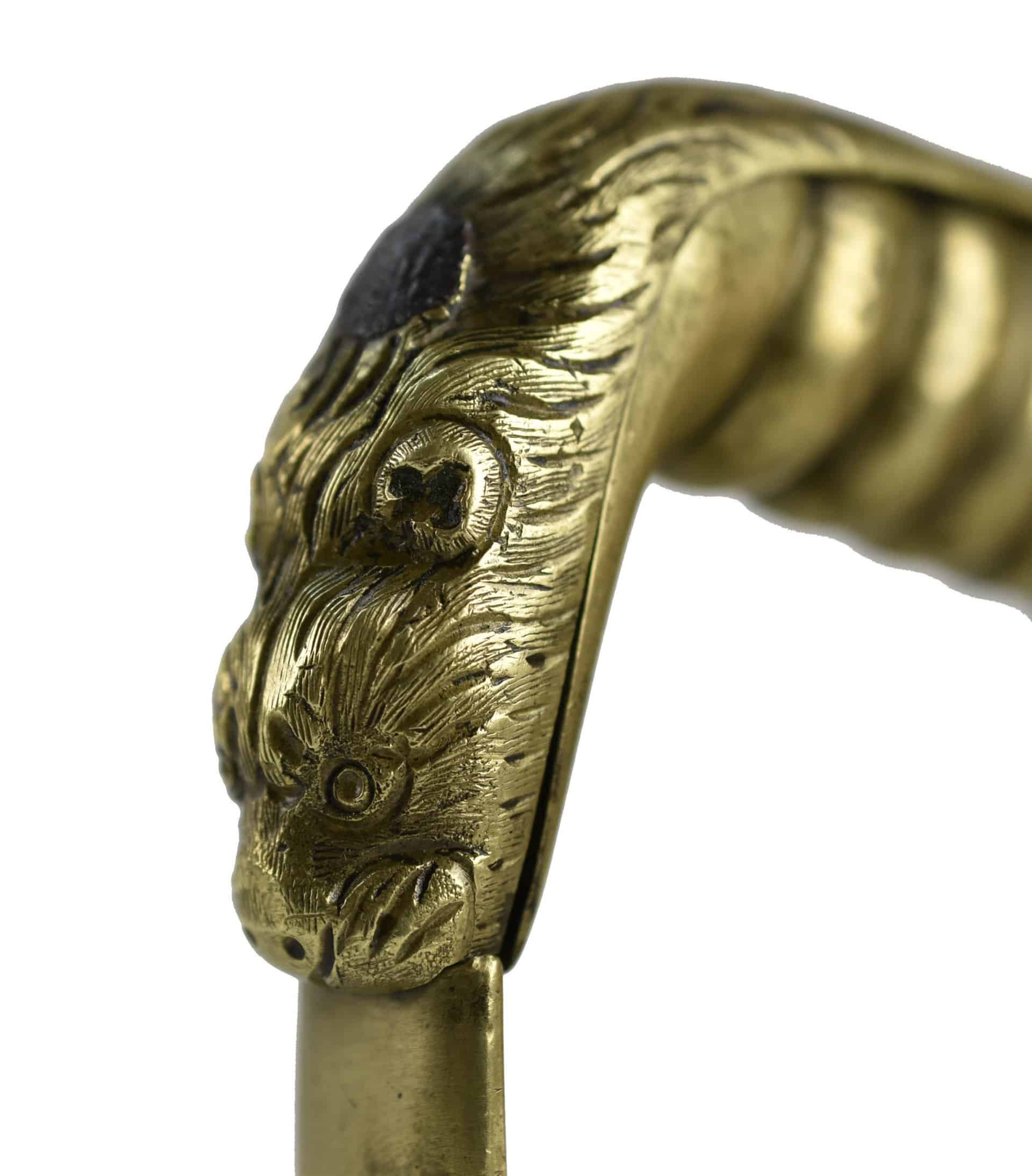 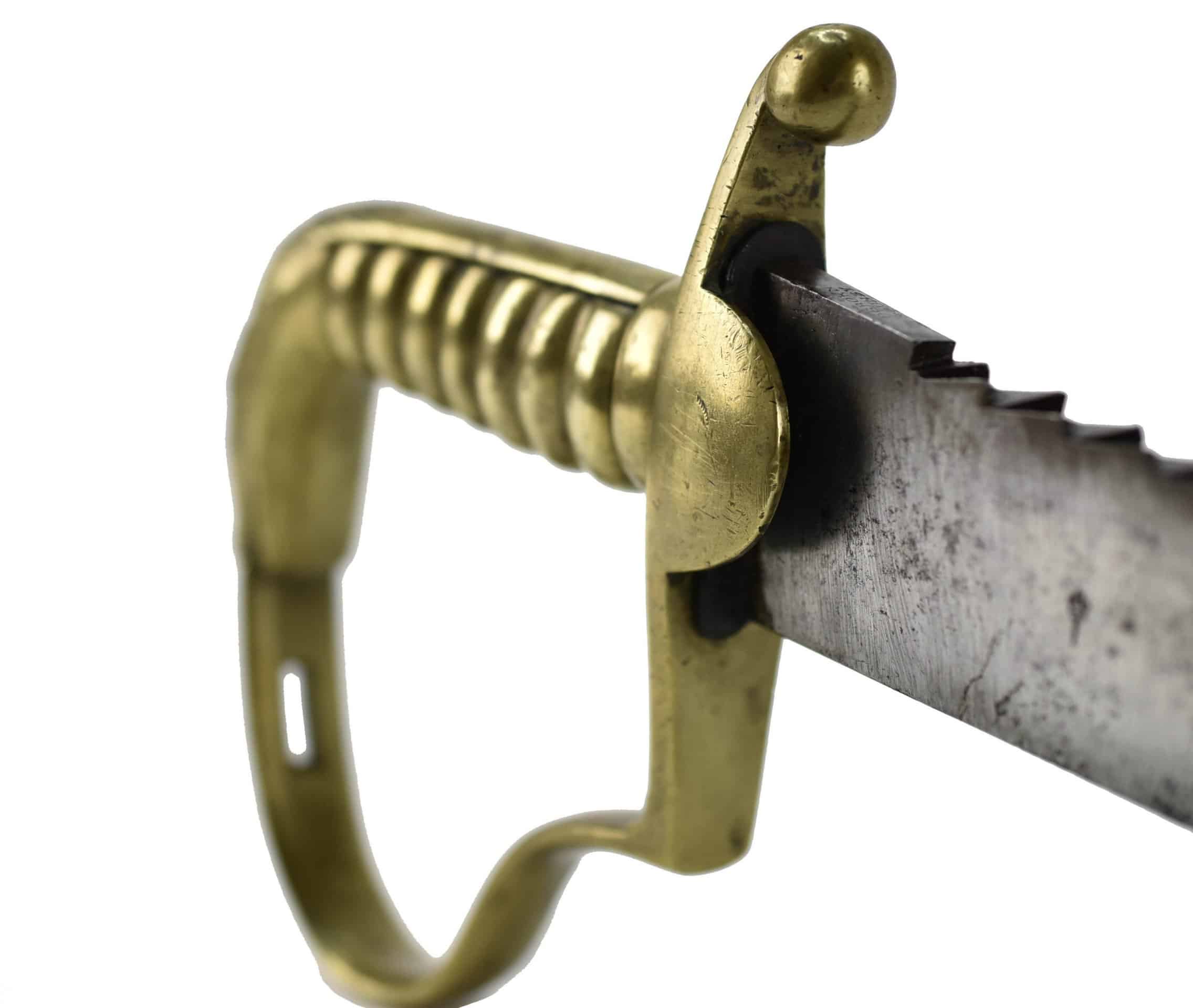 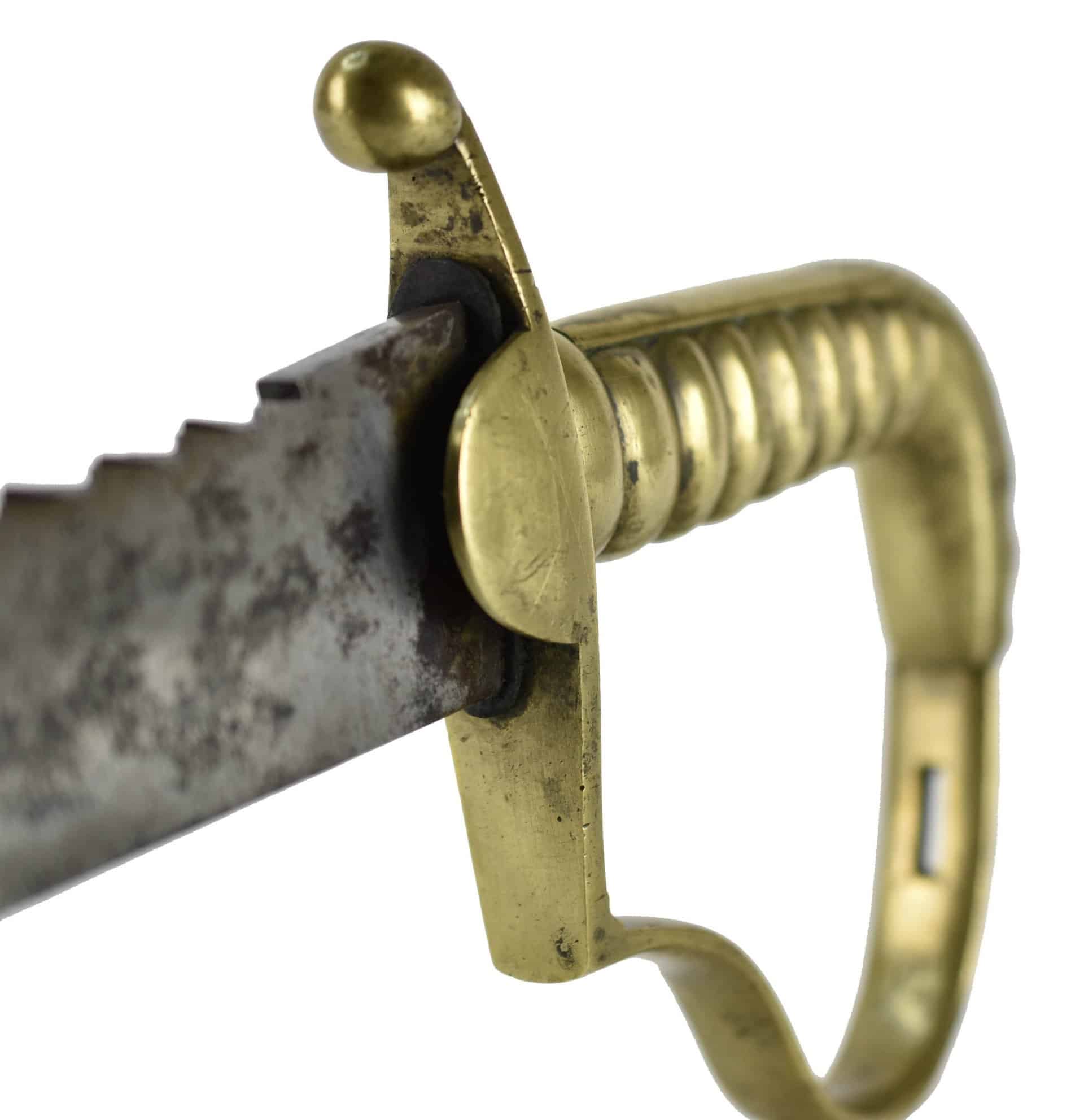 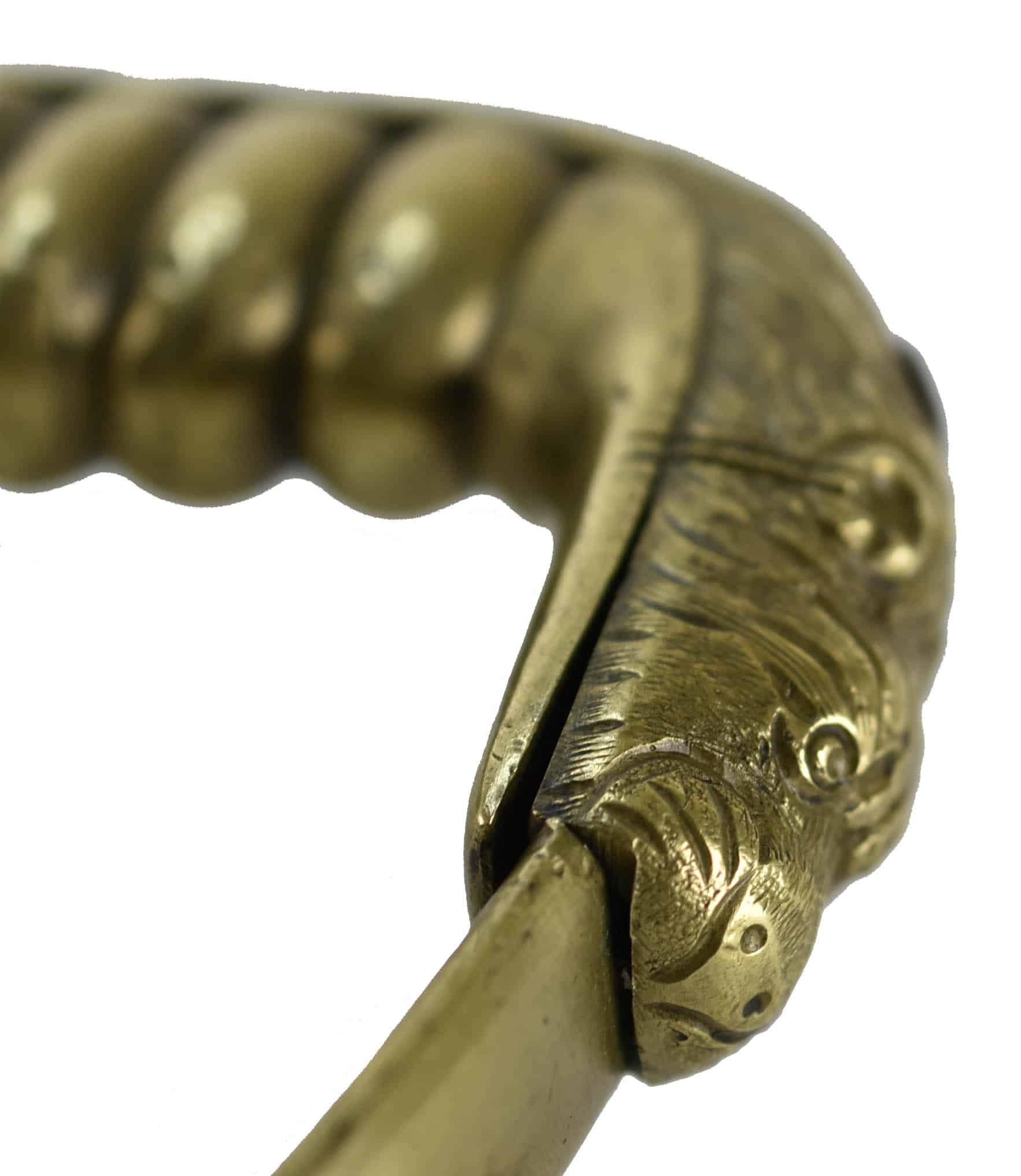