After the fall of the Qing Dynasty, the Republic period was installed and modernized warfare had begun to change the battlefields. As the Chinese were strongly intertwined in the practicing of martial arts, their weaponry was modernized, yet an older element was still implemented in the army ranks; the ‘dadao‘. A broad sword which can be seen as iconic weapon for its period and which aroused fear among the enemy ranks and the Chinese civilian population. The ‘dadao‘ was used by the army, but also among paramilitary groups, law enforcers like the military police and even rebels.

The ‘dadao‘ can be translated as simple as ‘big knife’ and has a characteristic wide blade with a single cutting edge and near square tip. Besides military use, the ‘dadao‘ is also commonly used among martial arts practitioners. The hilts vary in length and have a ring pommel on which a cord could be attached to ensure the owners grip. Most blades from the period have a double fuller which runs down a significant part of the blade and fades towards the tip.

This example:
Besides military use, the ‘dadao’ was also regulated in Chinese law enforcement and used to behead convicts. During the rather brutal first half of the 20th century, the ‘dadao‘ was associated with fear and terror among citizens. The fact that the blade of this ‘dadao’ is rather long , indicates this ‘dadao’ was worn as a two handed weapon which is either associated with infantry or law enforcement use.

The hilt:
Consisting of a flat iron bar with a ring pommel. The tang is covered with two wooden handles which are covered in blue fabric. The guard is typical for the period, circa 1930’s, and is made of one piece of bronze with two rounded quillons facing forward. Both quillons are decorated with a silk knot ending in fringes.

The blade:
Of heavy quality and of typical form, a distinguished curve and flattened near the square tip. The blade has two fullers on both sides and shows an etched decoration of clouds and a dragon chasing a flaming pearl which is placed in a banner. This mythological symbol can be seen as an auspicious symbol for energy, wisdom, prosperity, power and immortality.
Most ‘dadao‘ blades are plain and undecorated, but in this period the etching of blades was practiced, but is hardly seen on the ‘dadao‘. The blade was once nickel plated and acid etched to reveal the cloudy pattern with the dragon. Due to lack of care and rust, the nickel was mostly gone, yet the etched decoration is still visible.

The scabbard:
Unlikely to most other swords and sabers, the ‘dadao‘ was worn on the back. Hence the large sling attached to the leather scabbard to make it comfortable to wear the sword on the back.
The pig skin leather was used as both military or governmental issue and the 29th regiment of the Nationalist Army used these during the Sino-Japanese War (1937-1945) and the Chinese Civil War (1927-1947) as well the paramilitary groups during these periods. Our ‘dadao‘ listed here shows no military marks and can therefor not be attributed to any military regiment.

Condition: Very good, minor ware and including its original scabbard. The wrapping on the hilt has some movement which is normal considering its age. The fabric on the pommel is very thin and worn and the silk knots attached have lost their bright colour during time. The brass guard has a small crack, which is not disturbing. The blade was once nickel plated, but most of it was worn, further in very good condition.

– ‘A Social and visual history of the Dadao: The Chinese Military Big-Saber’ by Benjamin Judkins (Kung Fu Tea) 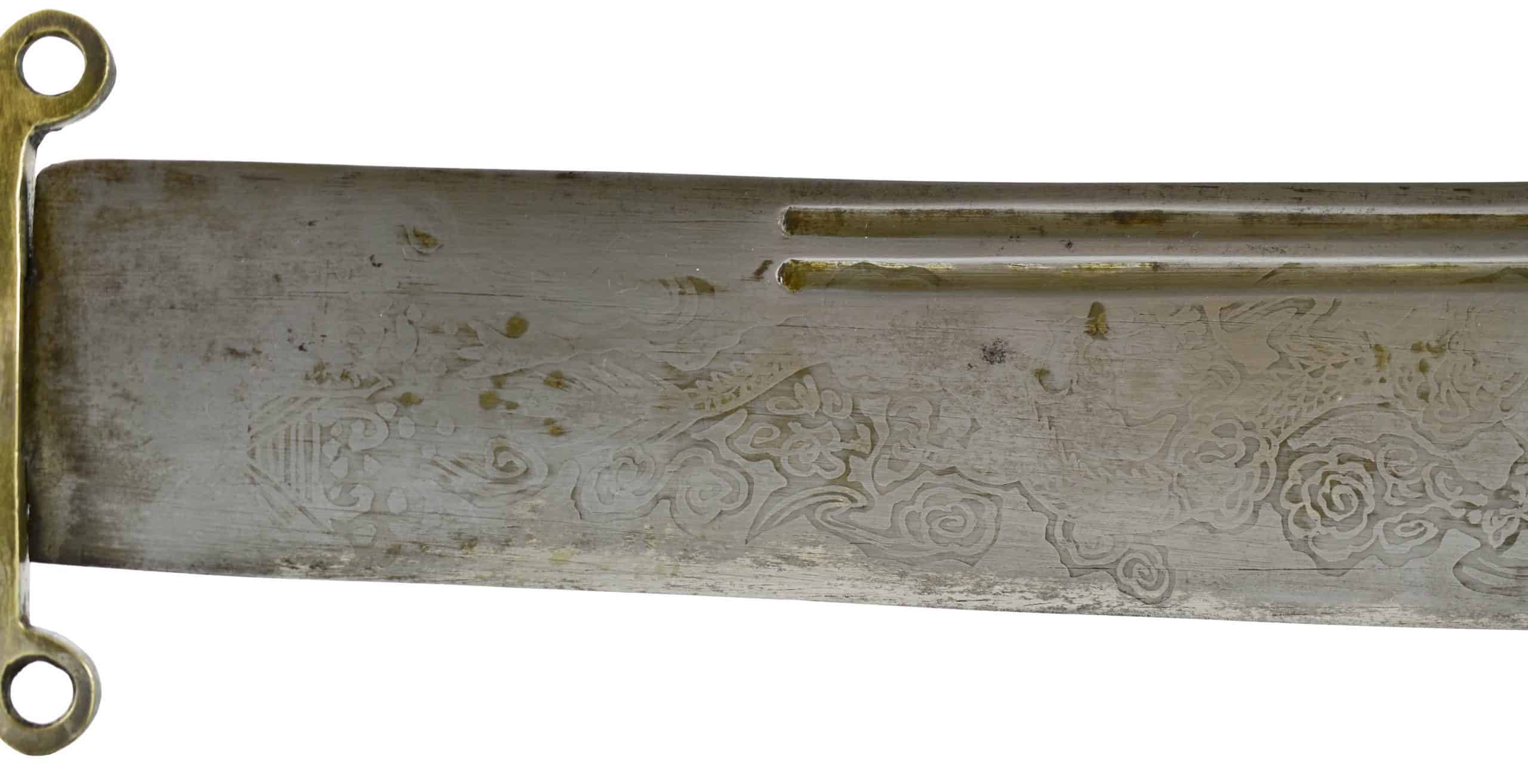 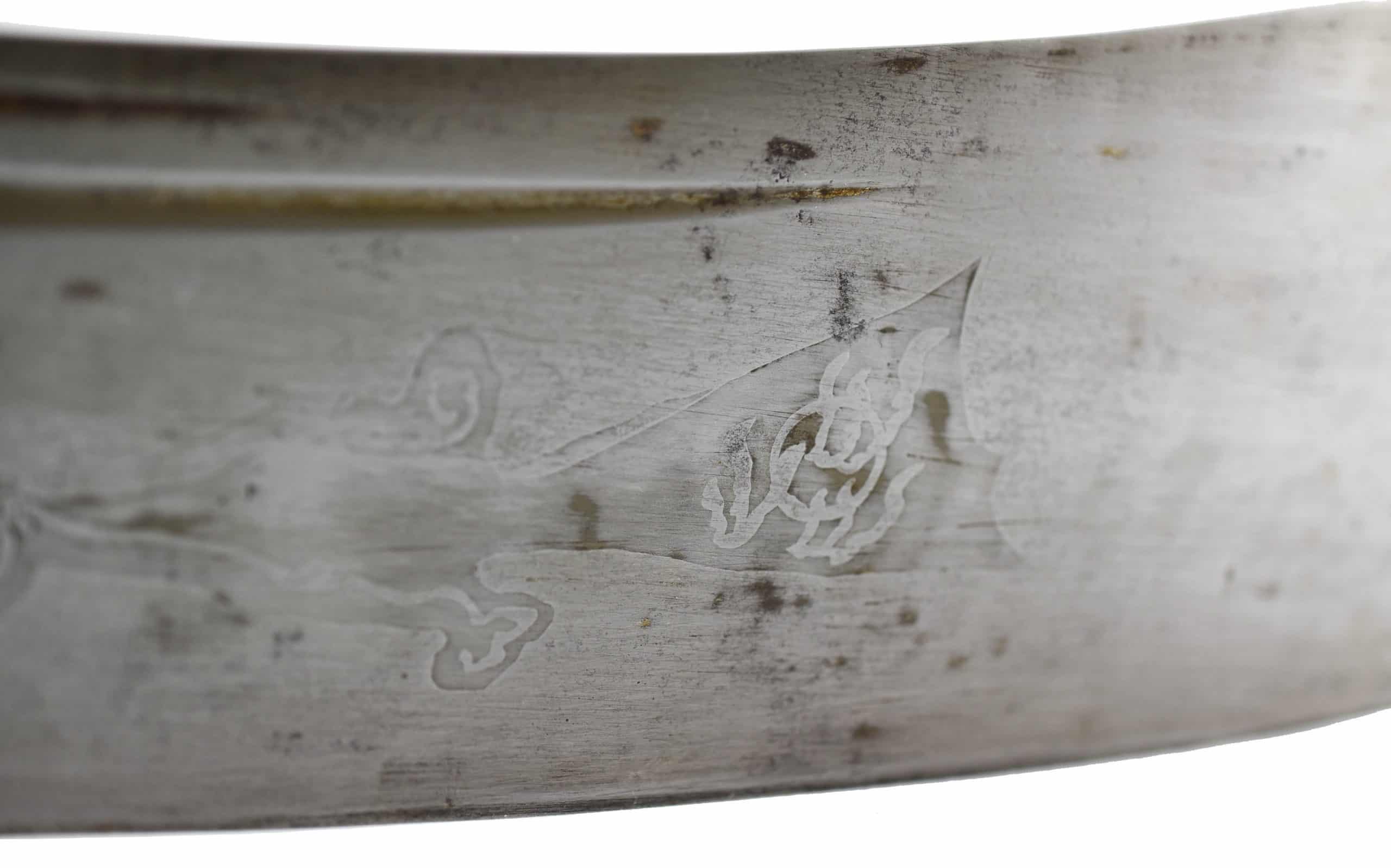 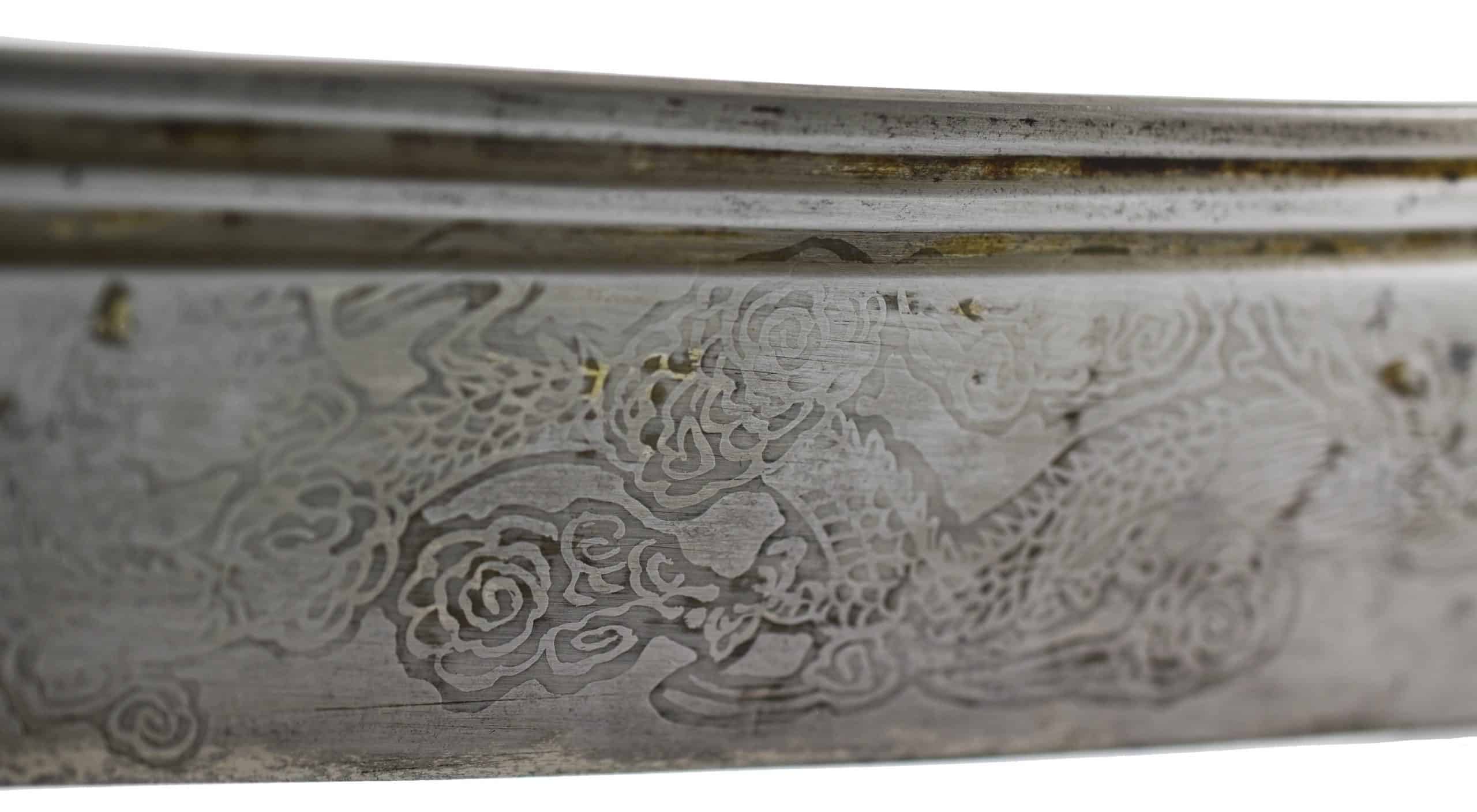 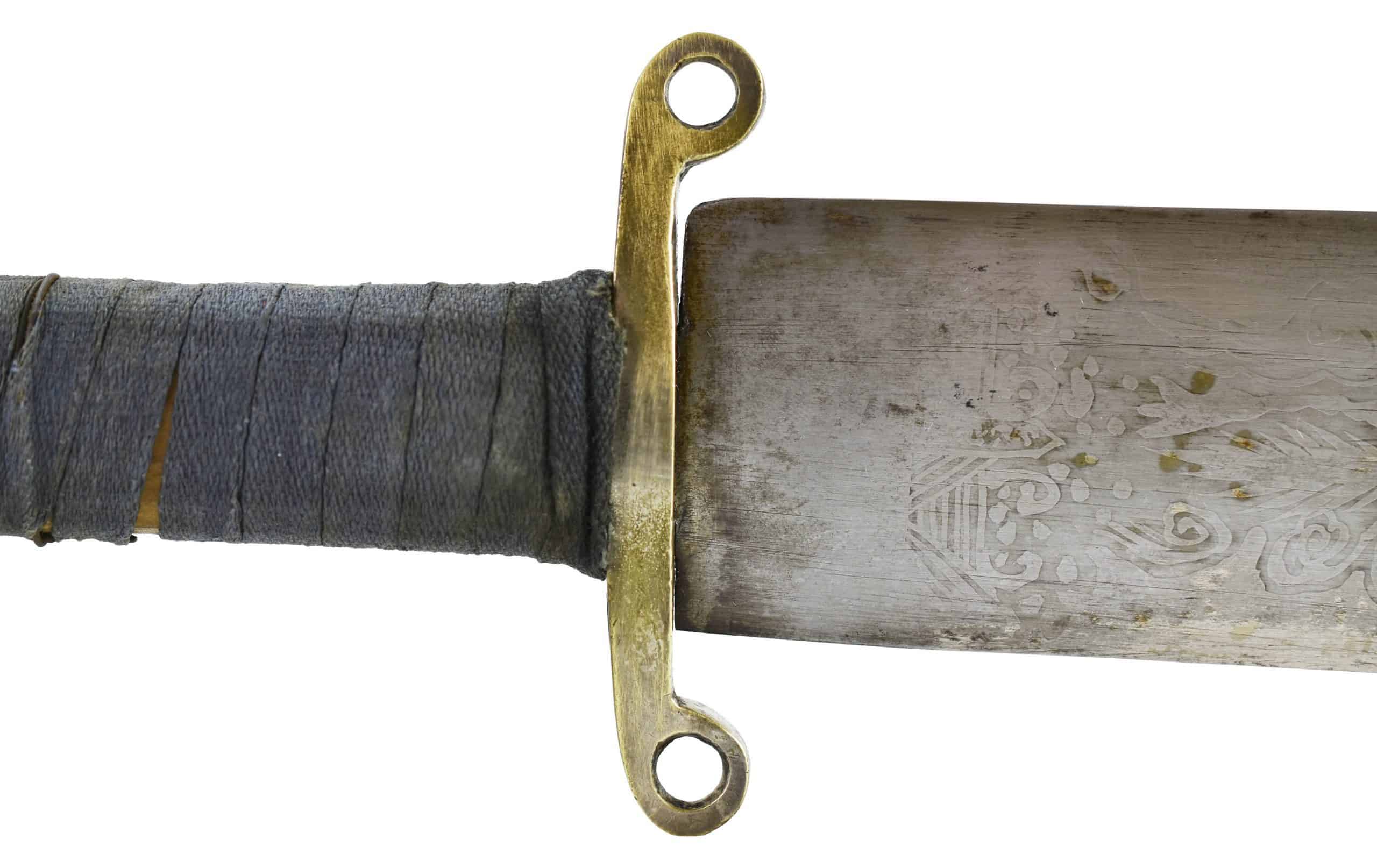 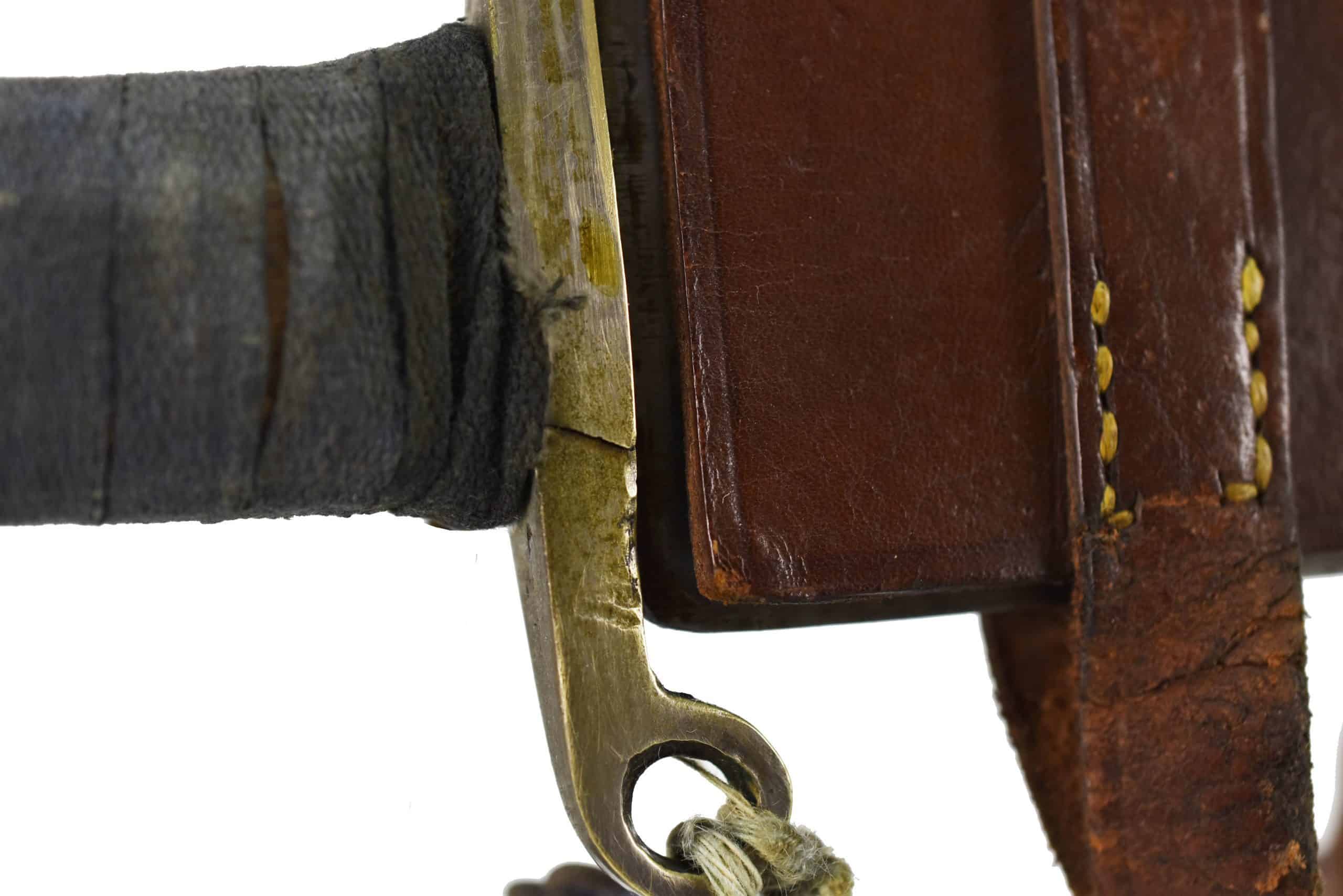 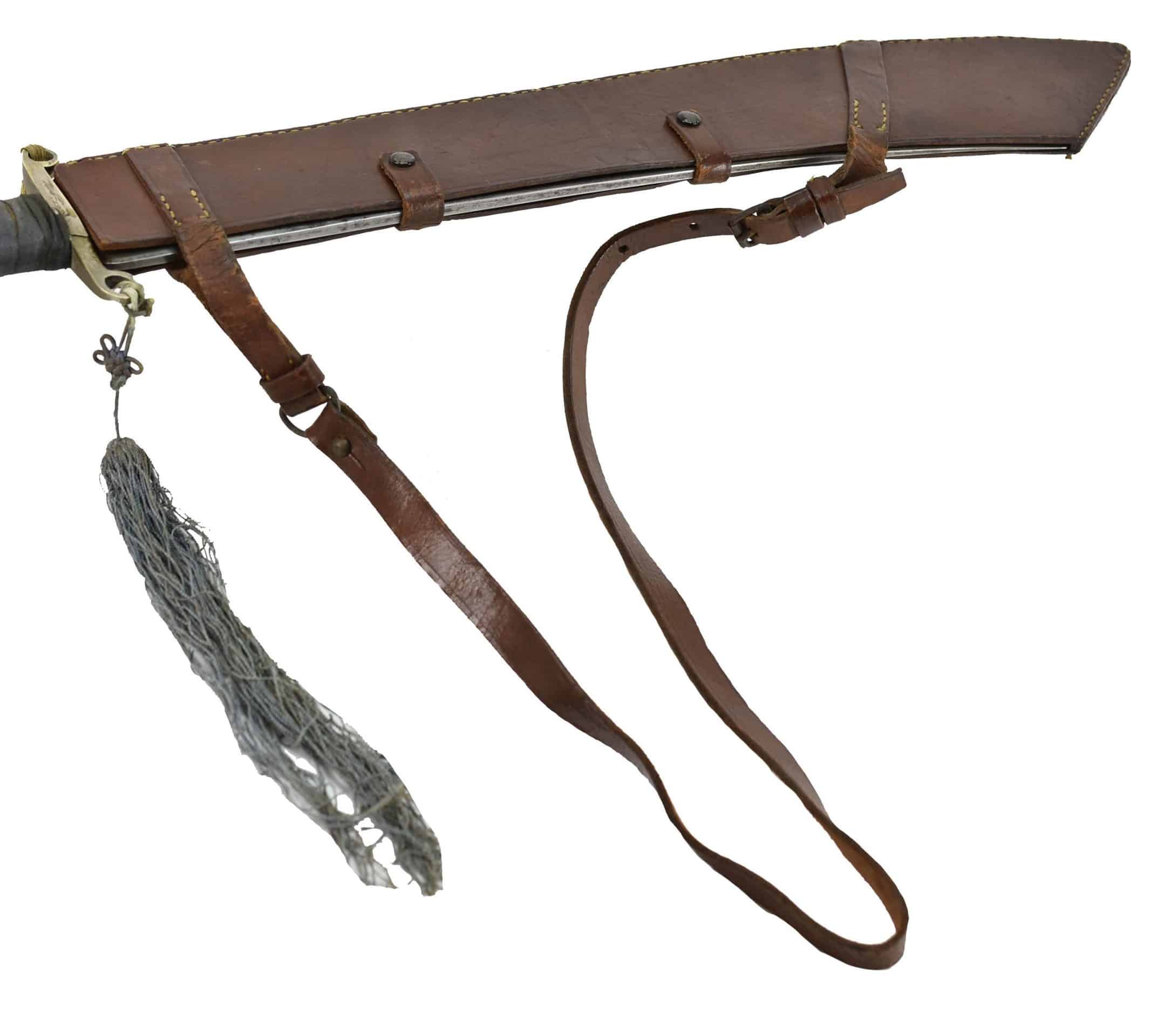