A Kraton Keris from Cirebon

The keris is one of the most iconic weapons of the Indonesian archipel. Besides hundreds of years of heritage, it is also known in Indonesian religion to posses mythical powers. The keris from the modern period (1300-1600A.D.) are also an important symbol of status for the owner.
Not every keris was suitable for every man. The ‘Empu’ (bladesmith) forges the blade to identify its future owner. Aspects such as leadership, wealth, luck or capability of consorting with bad spirits are a few of the numerous types.

This example has its origin on Cirebon, North Java and was made for a leader of high social class. The finely carved hippo-ivory hilt and thick well made eleven luk blade and twistcore pamor indicate the importance of the owner.

The Ukiran (handle):
Deeply carved out of hippo ivory (Hippopotamus amphibius) and is the oldest part of the keris. Likely 17th century and depicts a very stylistical version of the ‘Rakshasa‘ a Hindu humanoid diety. Mounted on a gilded brass ‘mendak‘ in Javanese style. This type of hilt is locally called ‘Putra Satu’ and is specifically attributed to the Javanese North coast. 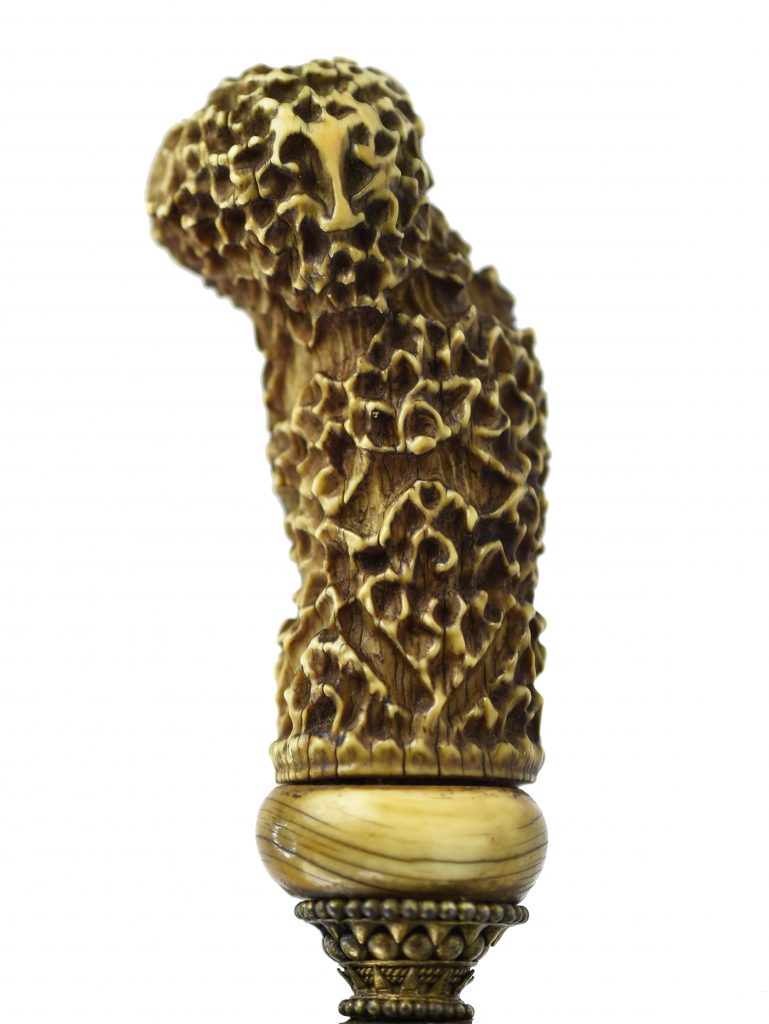 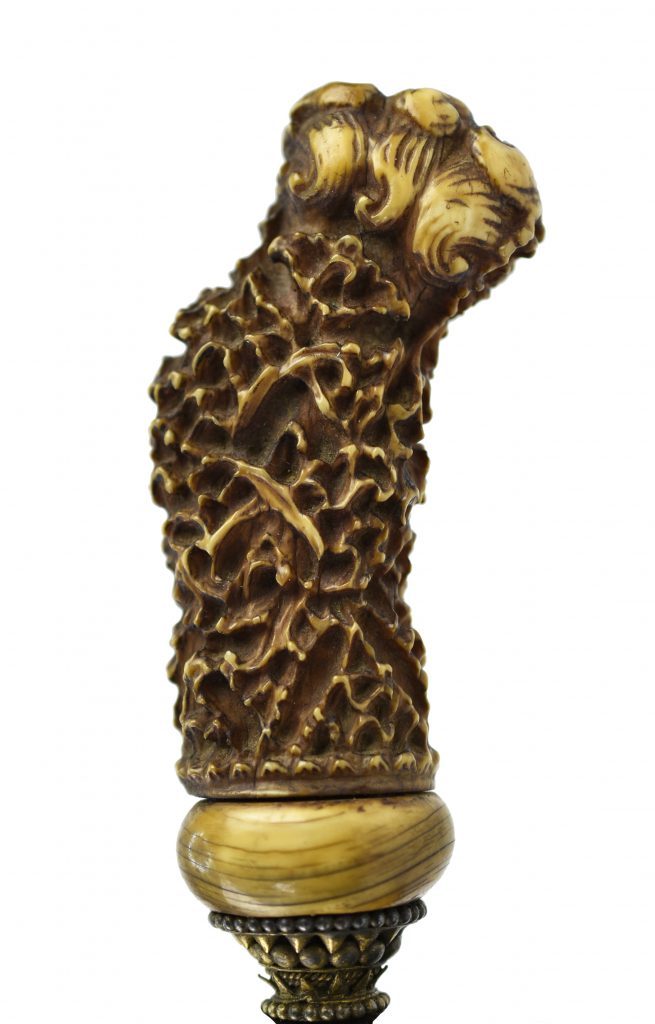 Rakshasa:
‘Rakshasa’ is a humanoid being in Hindu mythology. As this mythology influenced other religions, the rakshasa was later incorporated into Bhuddism. Rakshasas are also known as ‘Maneaters’ . A female ‘Rakshasa‘ is known as a ‘Rakshasi‘. The ‘Rakshasas’ were most often depicted as ugly, fierce-looking and enormous creatures with two fangs protruding from the top of the mouth and having sharp, claw-like fingernails. They are shown as being mean, growling like beasts and as insatiable man-eaters that could smell the scent of human flesh. Some of the more ferocious ones were shown with flaming red eyes and hair, drinking blood with their palms or from a human skull. Generally they could fly, vanish and had ‘Maya’ (magical powers of illusion), which enabled them to change size at will and assume the form of any creature.

The Wilah (blade)
A scarce blade with a very interesting twist-core pattern beginning in two separate twists, ending up together towards the tip. The blade has eleven ‘Luk’ (curves) which represents the mythological ‘Naga’ and is associated with high social status. The ‘Dapur’ (blade form) is called ‘Cerita’ and the applied pamor is one of the rarest types (Mayang Mekar) which represents palm leaves and is a pamor form appointed to a select group. Likely dating from the 18th century.

The dress:
A typical Javanese combination, wooden ‘Wranka’  with a form only seen on Java. The scabbard consists of two wooden sheets held together by a silver cover (pendok). The pendok usually comes in three varieties, open, half open and closed. The latter, which is called ‘Boenton’ is seen on this pendok. The decoration which is entirely in repousse technique done by hand is, according to Gröneman*,  attributed to the ‘Kraton’ only. 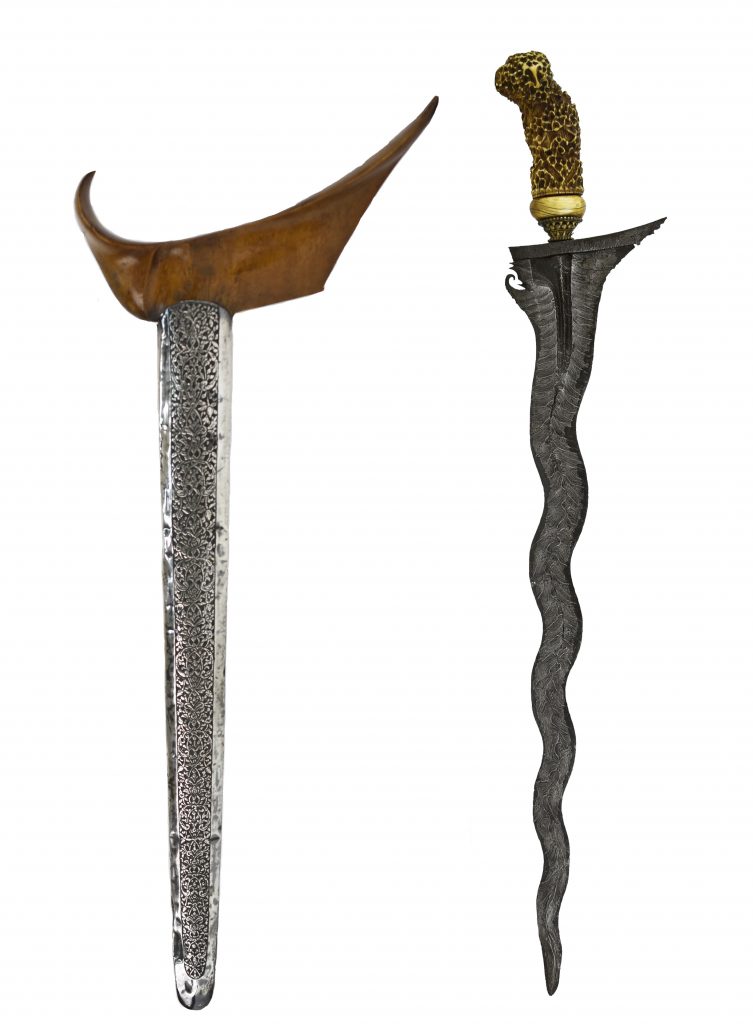 Condition: Very good, blade and hilt are in perfect shape. The warangka has an old repair and the silver pendok features dents.

Provenance: Dutch private collection, former citizens of Java which returned first half of the 20th century. 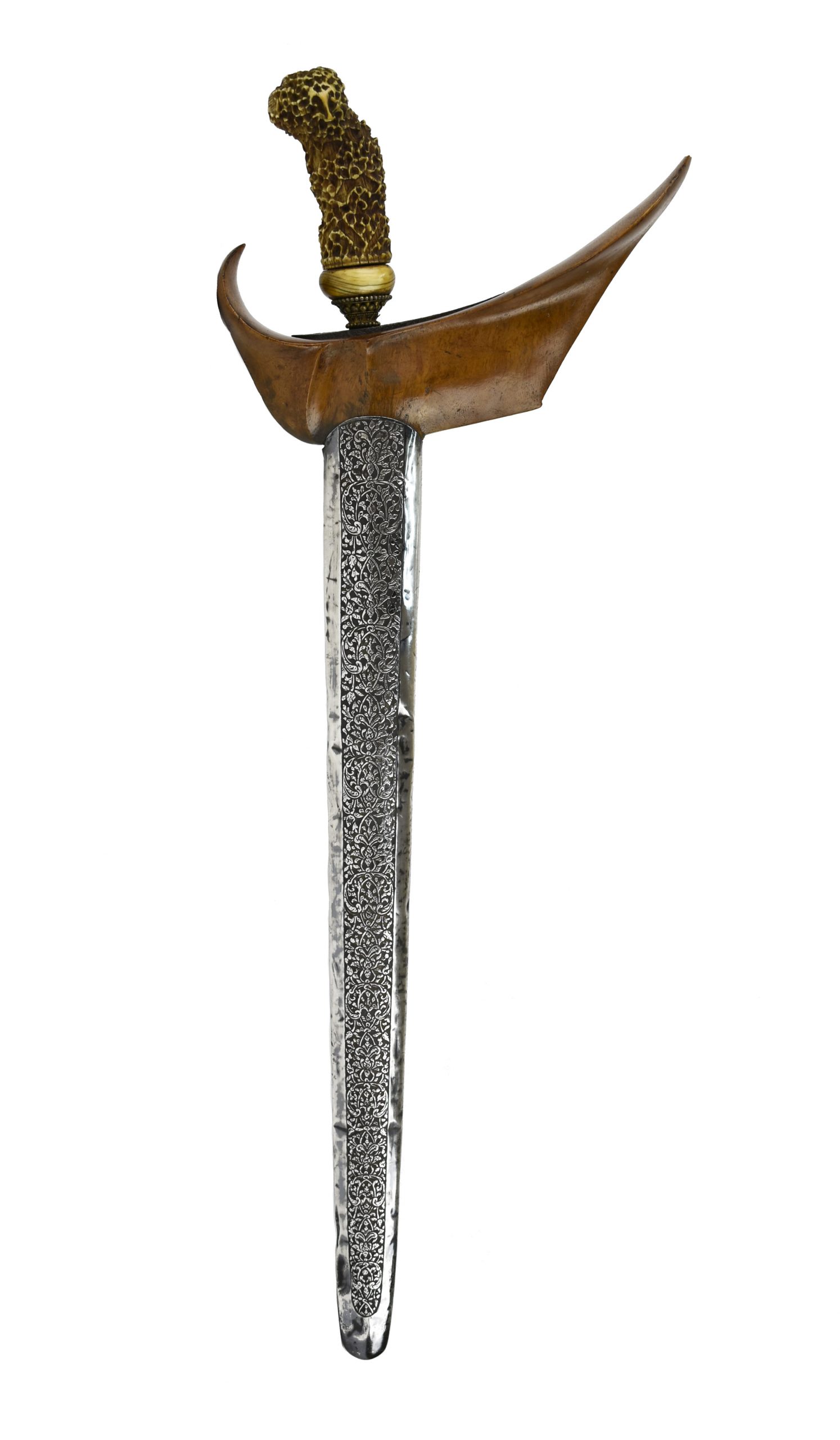 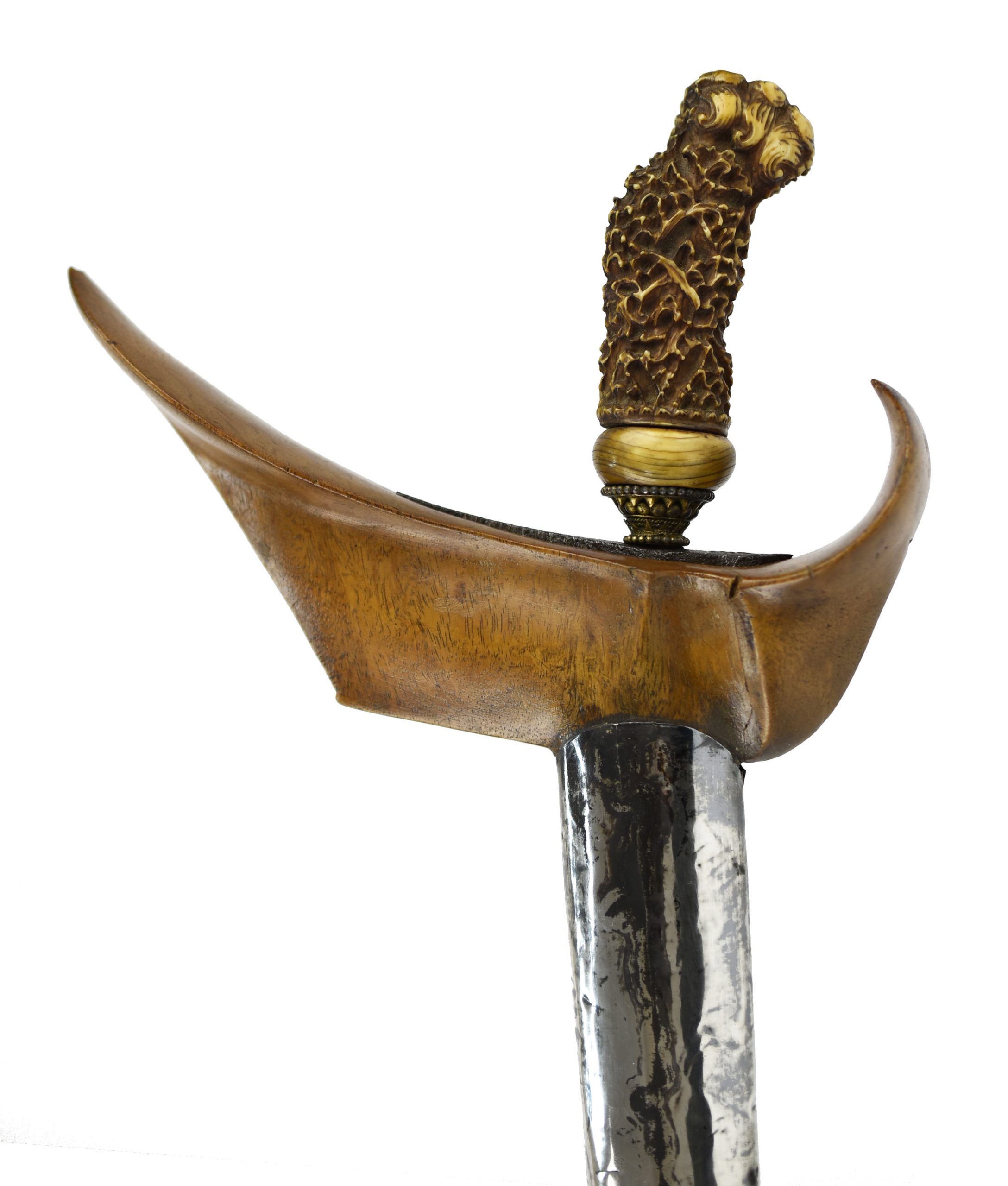 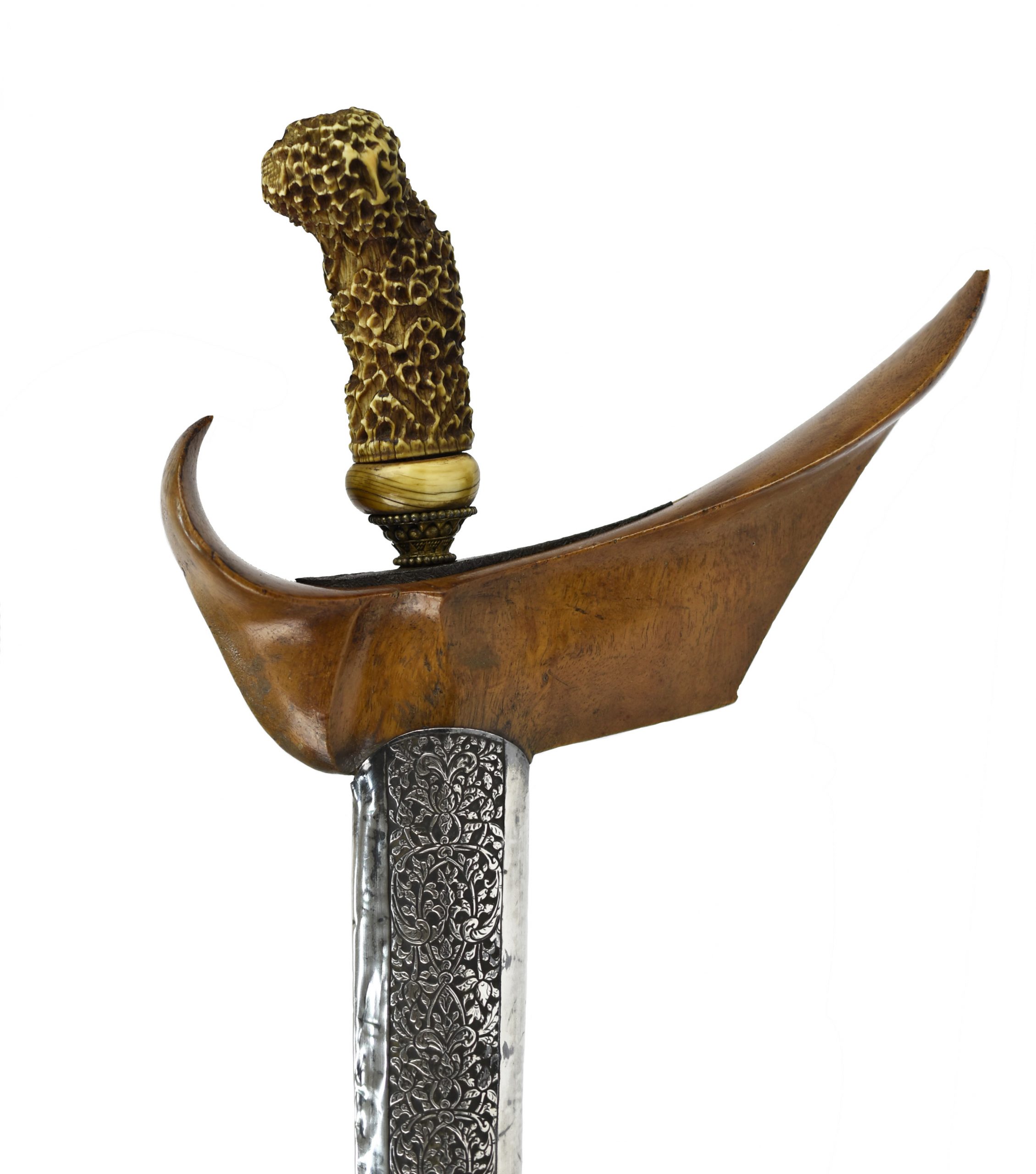 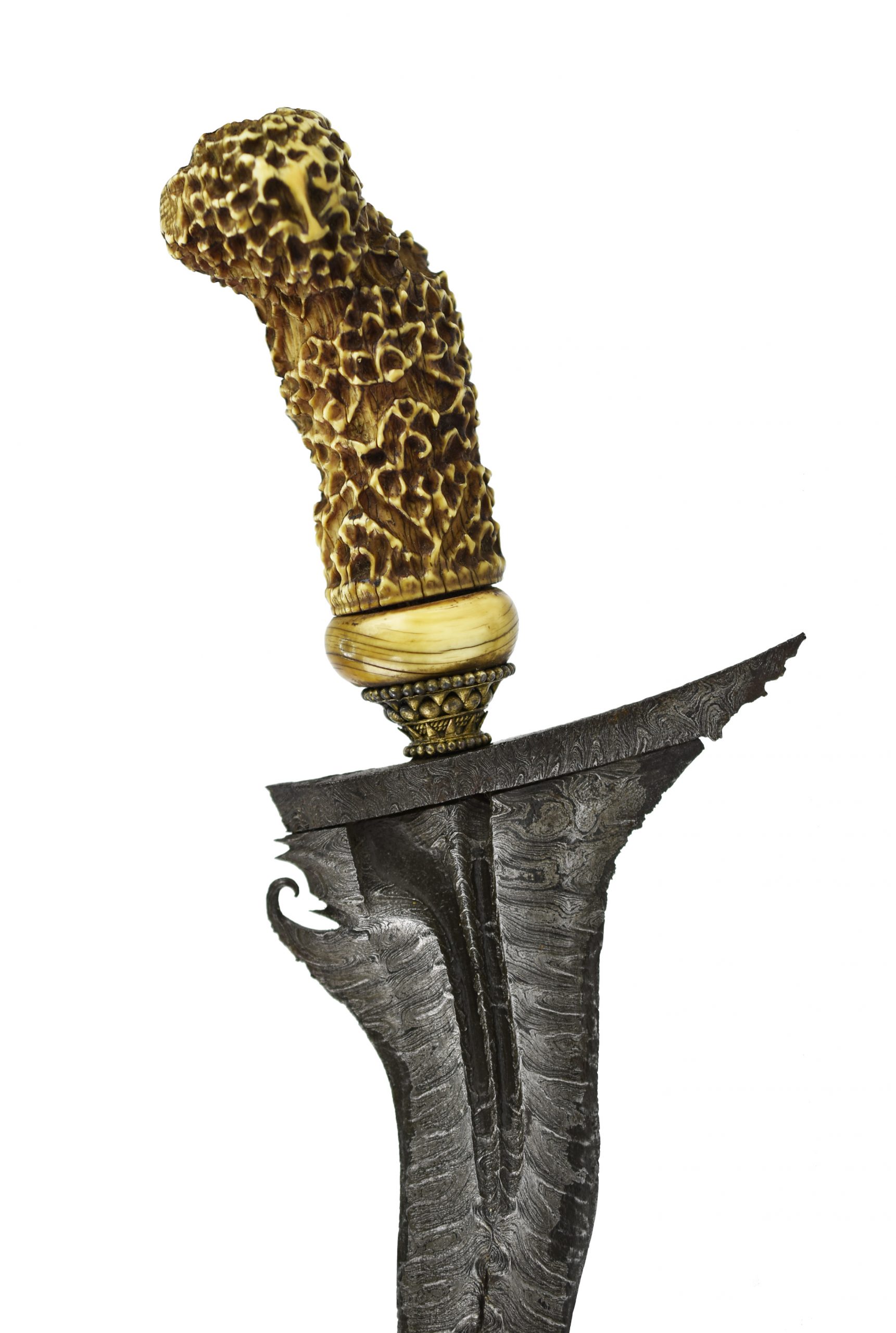 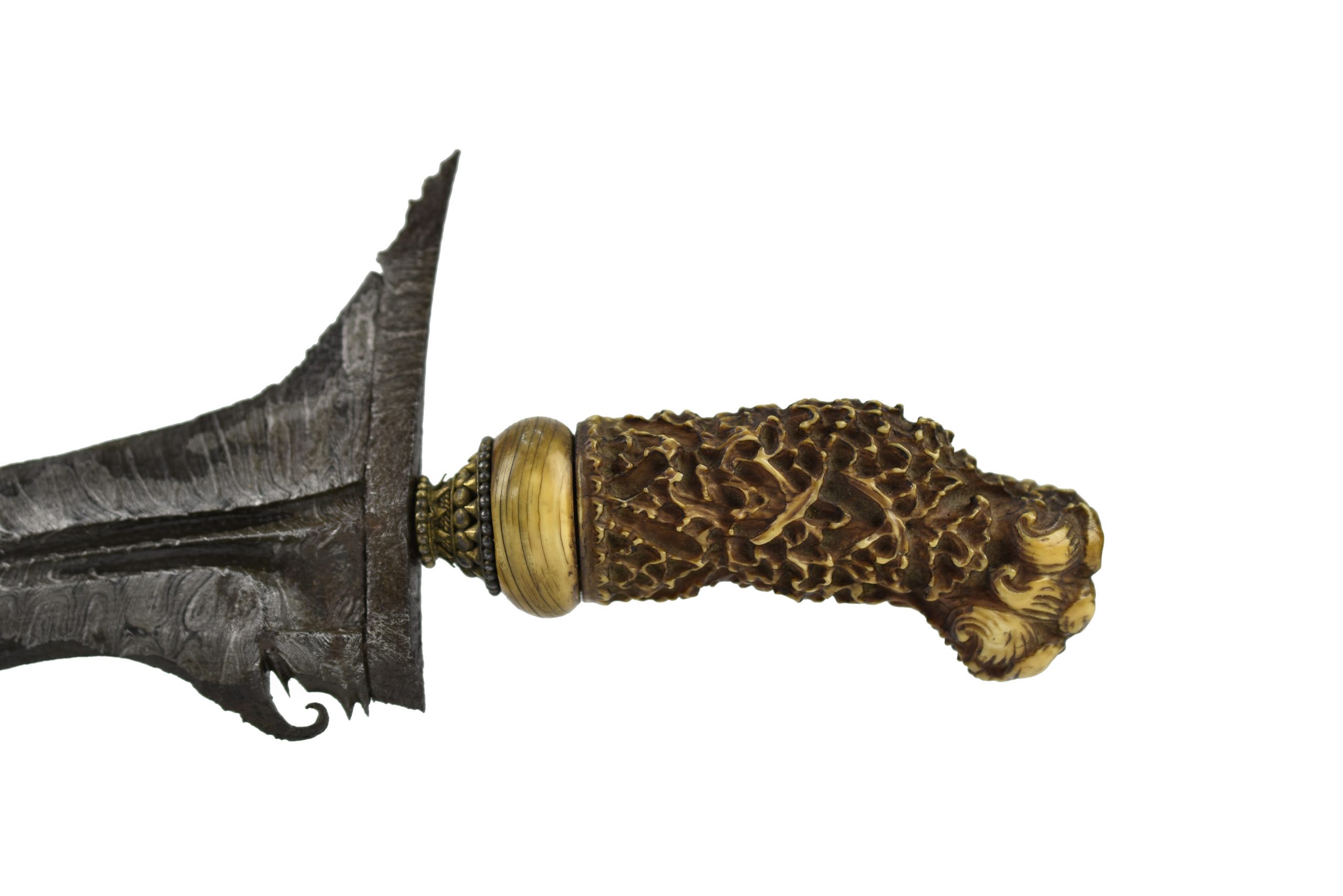 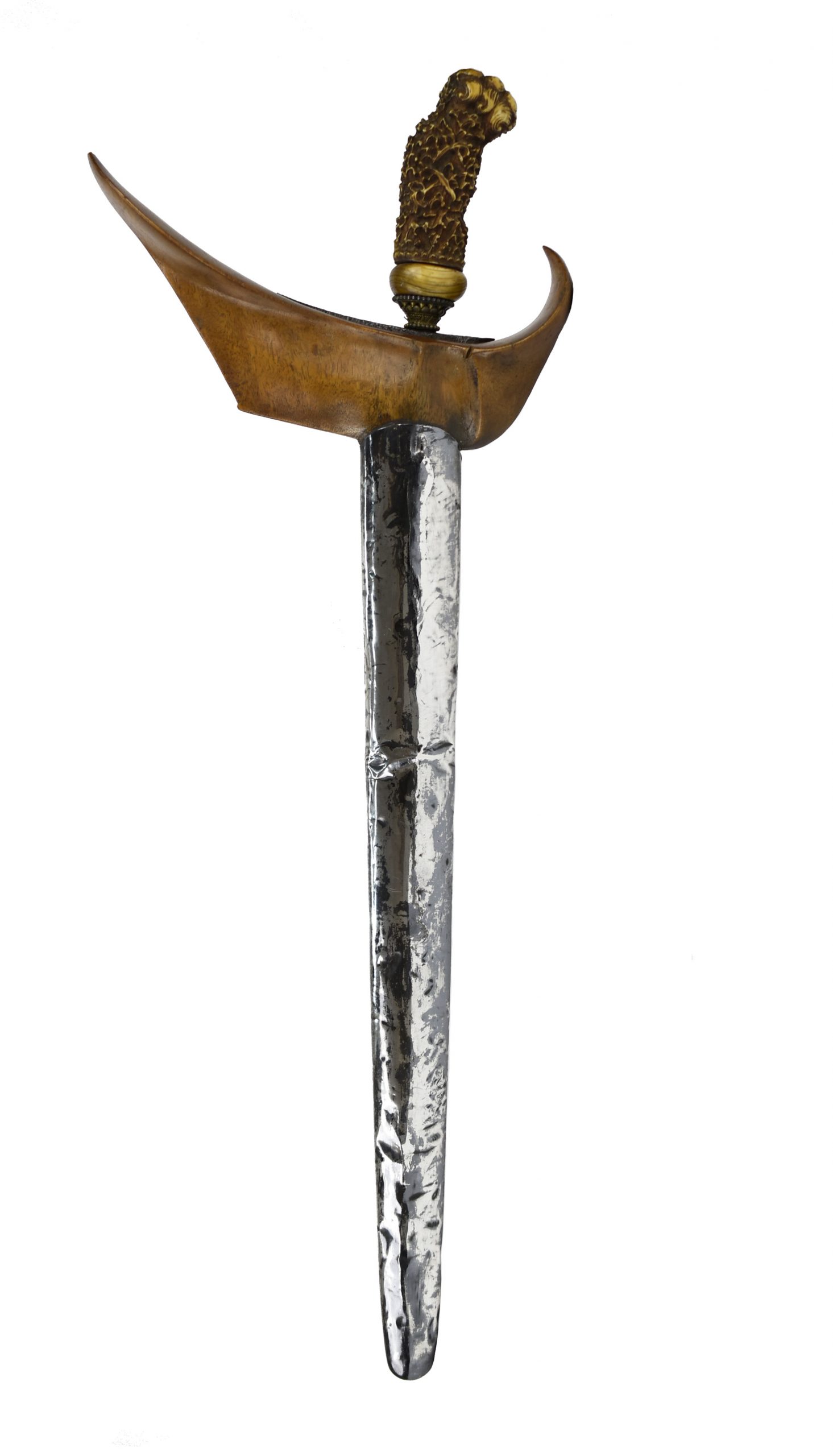 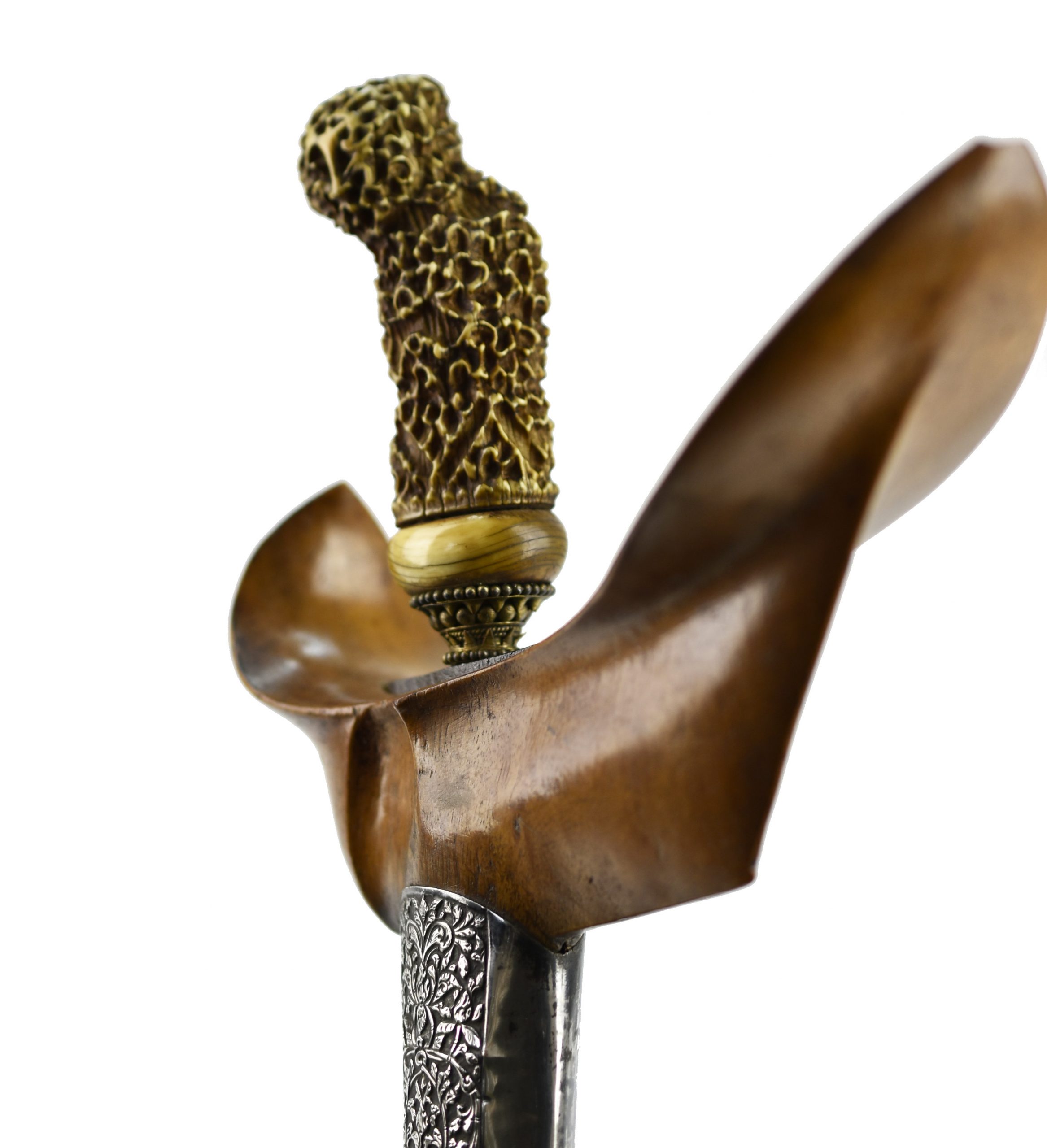 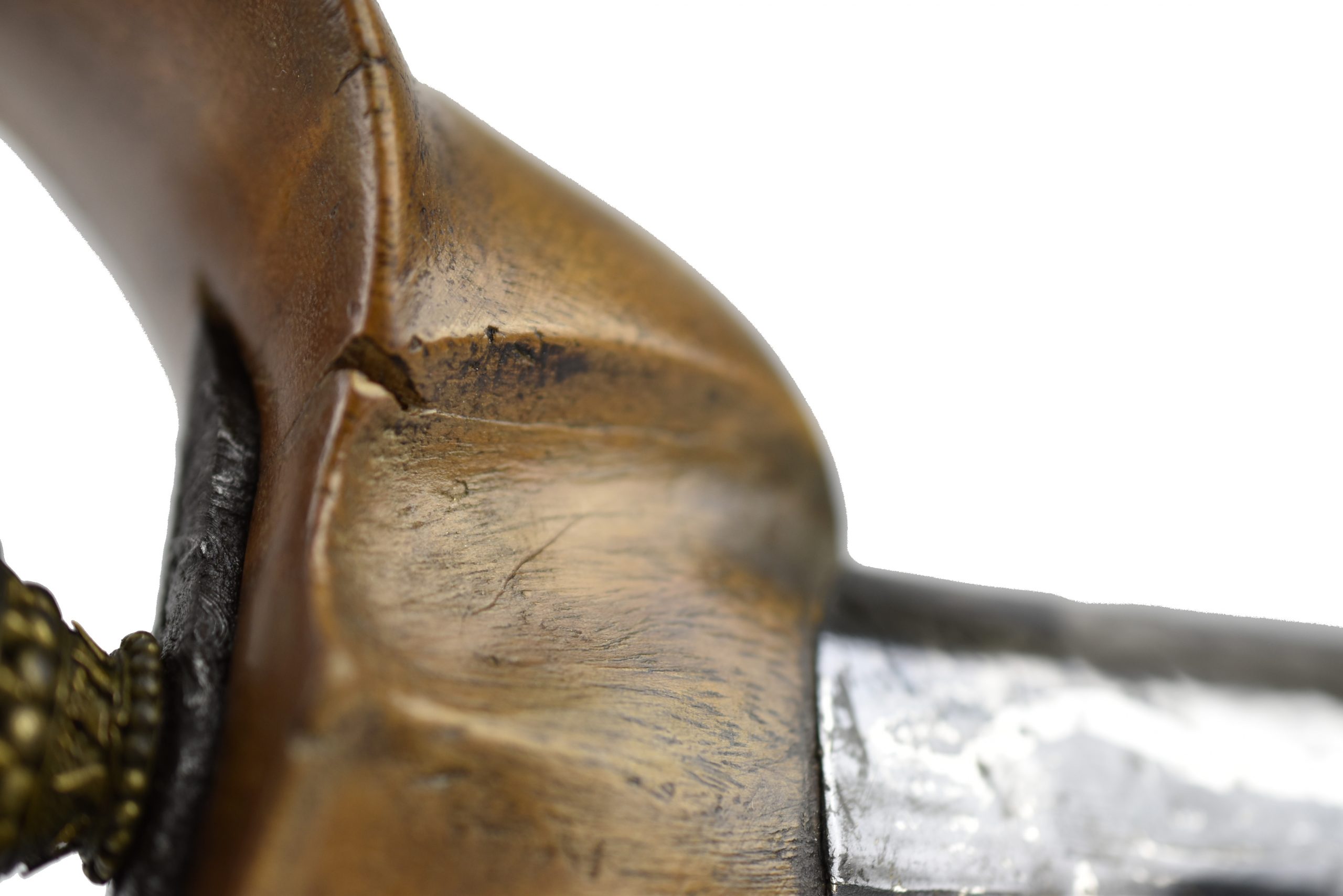 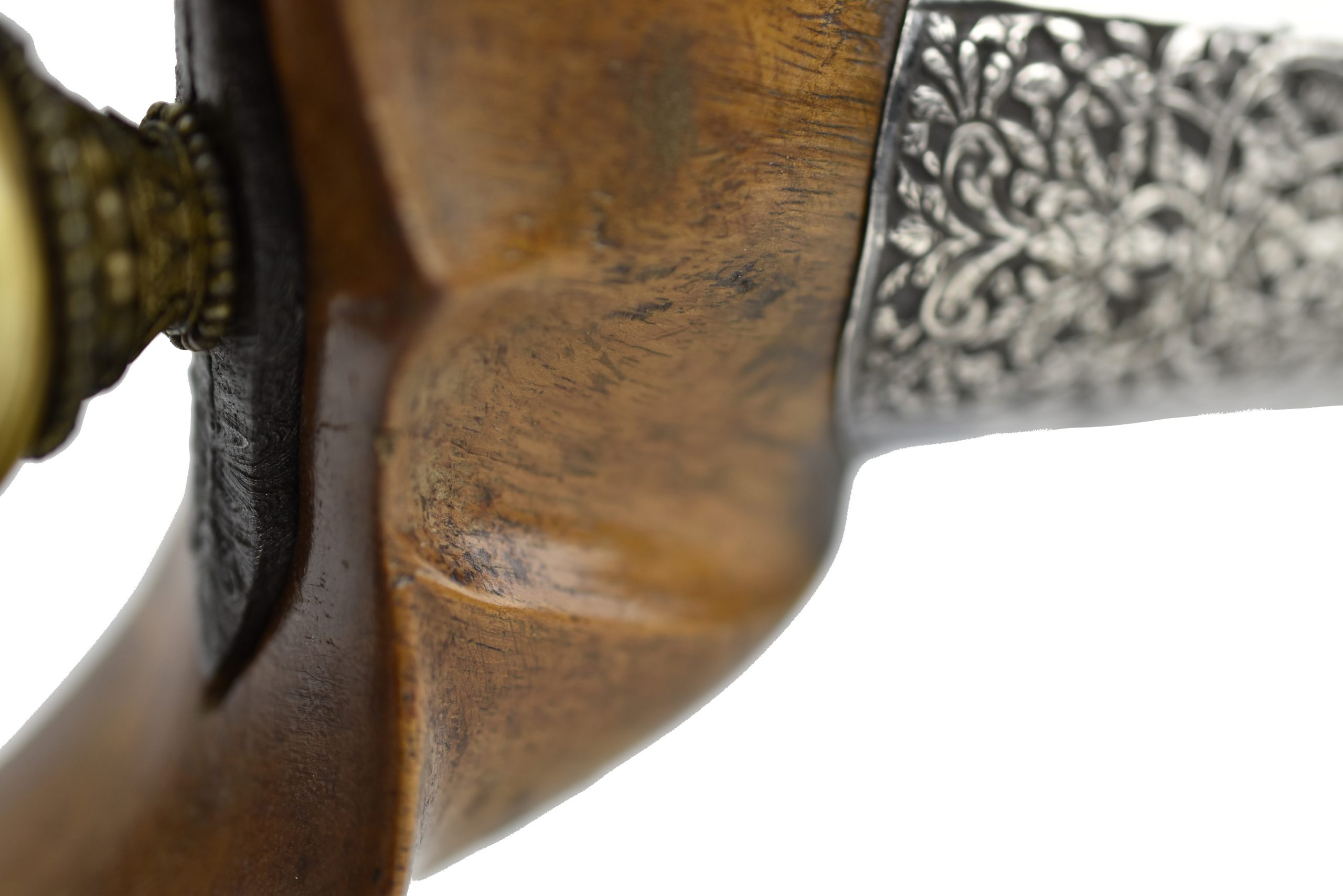 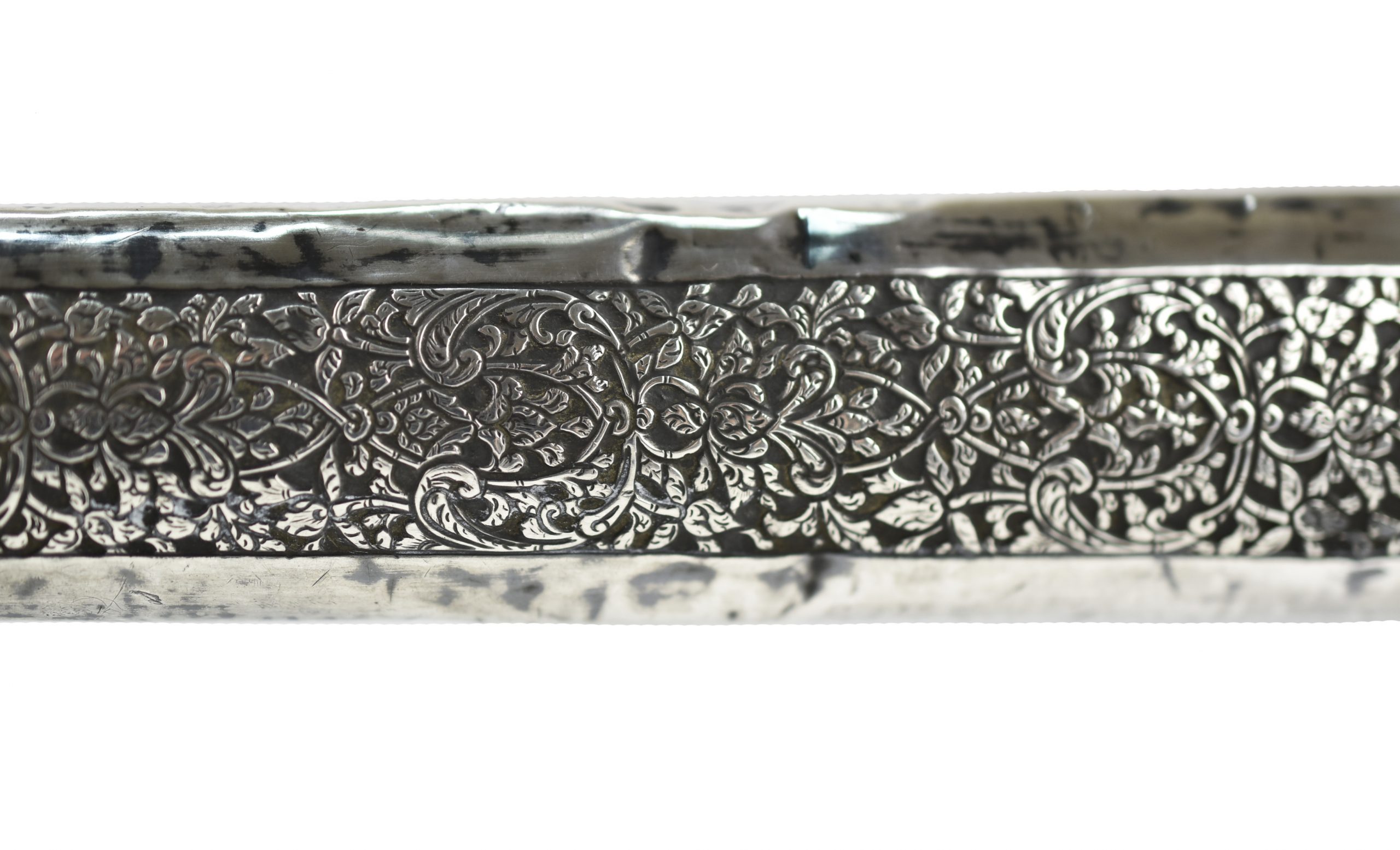 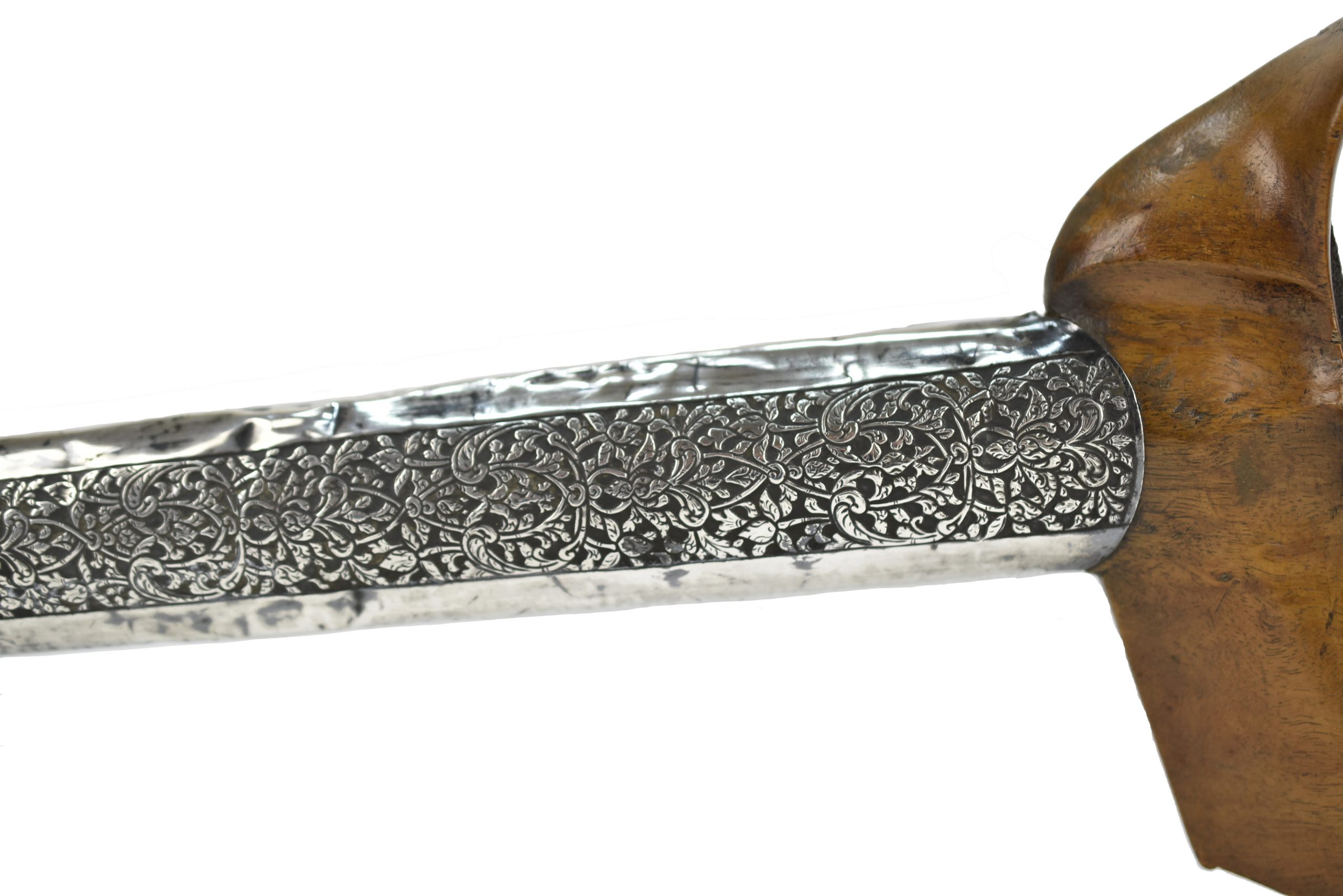 Important note: Made before 1947. Comes with registered certificate, conform CITES law in the European Union. Custom rules apply outside Europe.