A Blunderbuss from Aceh

The blunderbuss has its origin in the 16th century, due to their short firing range and coarse reloading possibility they were mostly used in naval and cavalry warfare. The blunderbuss was mostly seen with bronze barrels to avoid corrosion caused by salt water ,while on land the barrels were made of steel. The colonial examples were mostly made of indigenous steel or sometimes imported steel from Europe.
Most of these blunderbusses were produced in Borneo, Banjarmasin and Negara, where they were traded with the Dayak people and exported to Sumatra. The decoration leads us to the Chinese Straits, who were multiple represented in the Banjarmasin area. They often decorated the barrels with ‘Banji’ swastika motifs and floral designs commonly seen on Chinese furniture. The same goes for the decoration carved in the butt-stock.

These blunderbusses were in use during the Aceh war in 1873-1904 by guerrilla rebellions of the Acehnese sultanate and in Borneo during the Banjermasin war in 1859-1863. The Dayak often traded these guns in the region of Banjarmasin. The blunderbuss was used in guerrilla warfare against the Dutch expeditions which proved to be very affective in close quarter jungle fights. The blunderbuss was filled with bullets, but sometimes with shrapnel, beads or even shells. Proved very effective on close range, not always fatal, but one can imagine that being a European fusilier wounded by shrapnel in the heat and humid climate of the Sumatran jungle often resulted in fatality after all. The local Acehnese name for the blunderbusses is categorized in two types. The small blunderbuss is called ‘Kemoera Paneh’ and the larger ones like this example shown here is called ‘Kemoera Panjang’ according to a colored lithograph in Dr. J.Jacobs ‘Een familie en kampong leven op Groot-Atjeh Part II”. The matchlocks were preferred by most Achenese, simply because blackpowder was easier to come by rather then manufacturing percussion caps who were more difficult to produce.

J.C.J Smits describes the following in his book ‘Gedenkboek van het Koloniaal-Militair Invalidenhuis Bronbeek’: ”At the time the traveler Dr. Salomon Muller visited the former empire of Bandjermasin (1836), almost exclusively engaged in the manufacture of various types of weapons. “They make rifles,” he says, pistols, soldiers, and shotguns, damask sabers, swords, Native swords, and krises. In a word, all kinds of hand weapons. “Those weapons are part native, part European iron and steel. The firearms used by the Banjereese during the war of 1859-1863 consisted of lillas (big and small blunderbusses) and rifles of different models, mostly pan but also percussion rifles. Many weapons made of the Negara are exported, and this may explain the great resemblance to the firearms (Plate V) captured from the Battas in 1872 at Deli, on Sumatra’s east coast”.

This caption was written by General-Major Smits, the first commander of the Colonial Military Veteran boarding house Bronbeek, in 1881 and is therefor a good lead that these type of blunderbusses were made in the Banjarmasin and Negara area.

The barrel:
Smoothbore, made of indigenous steel with a nice forging pattern, which was derived from the Ottomans, with silver inlay in typical Chinese Straits style. The chiseled silver inlayed surface depicts a ‘Banji’ swastika variation and floral design which is often seen on Qing furniture. The barrel-tang is attached to the stock with a screw and held in place by a wedge. The flintlock mechanism is European import, British to be precise. Made in the last quarter of the 18th century by the firm ‘Tower’ in London for colonial export. The lock was marked with the ‘Broad Arrow’, a quality inspection mark. The center of the plate depicts a crown with the letters ‘G’ and ‘R’ which stands for ‘George Rex’, better known as King George. It remains in excellent functioning condition. Many examples were converted from flintlock to percussion in a later stage. This example has its original matchlock which indicates its early age. The barrel bares the Chinese ‘申’ mark which is likely ment for assembly of the gun parts.

The stock:
Made from mahogany with a carved and gilded prunus design on the butt-stock in typical Chinese style. The handle has a crosshatched design which is copied from the European sporting and hunting rifles. The base of the stock has two brass thimbles to held the ramrod in place. Underneath is a ring to attach a lanyard to carry the gun. The back of the butt is covered with a brass plate for protection. The trigger guard is made of bronze and provides excellent protection. 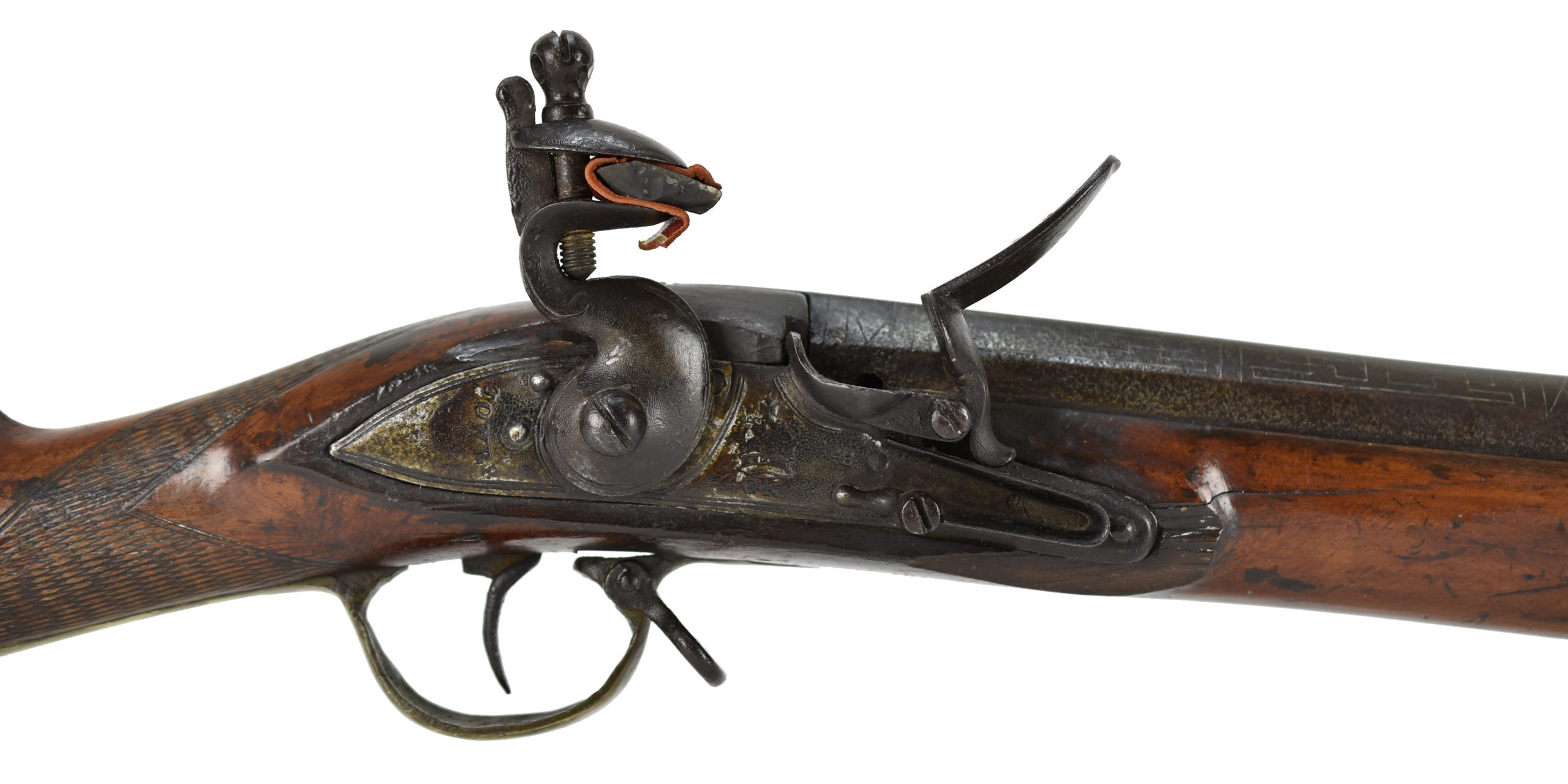 Conclusion:
Warloot from the Aceh expeditions. Brought back to the Netherlands by the KNIL army in the 19th century. A very scarce piece, hardly seen on todays market. An excellent example of crossing cultures, namely: European, Ottoman, Chinese and Indonesian. All influences put in this very attractive example of a colonial blunderbuss.

Provenance: Dutch private collection, brought back to the Netherlands as war loot from the Aceh war, a heirloom from many generations.

Condition: Very good, a beautiful patina and fine condition steel barrel. The matchlock is equipped with a piece of flint and functions very powerful. The ramrod has gone missing throughout the years and a small chunck of mahogany got off right under the lock. Further traces of use, but despite all that, a wonderful example. 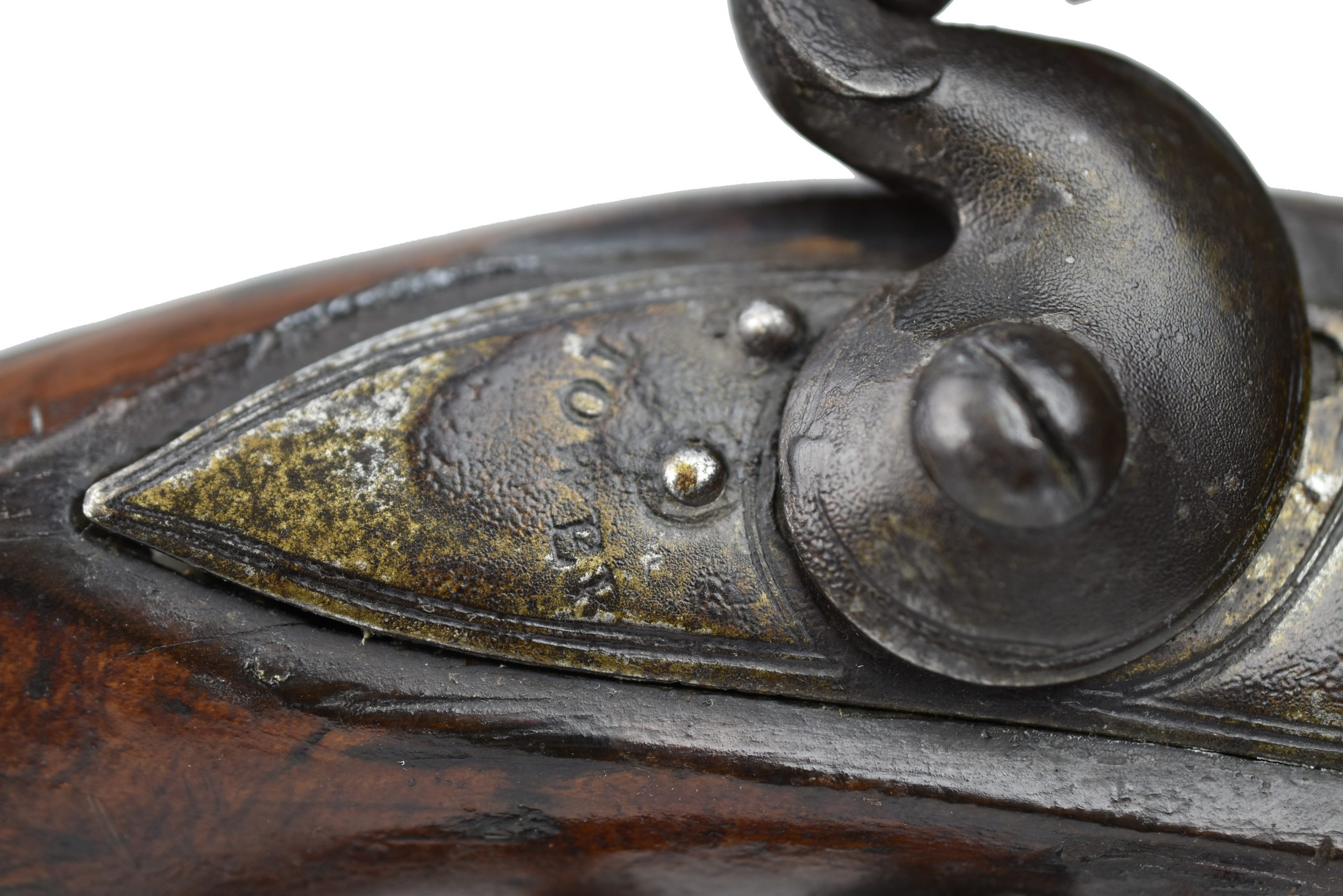 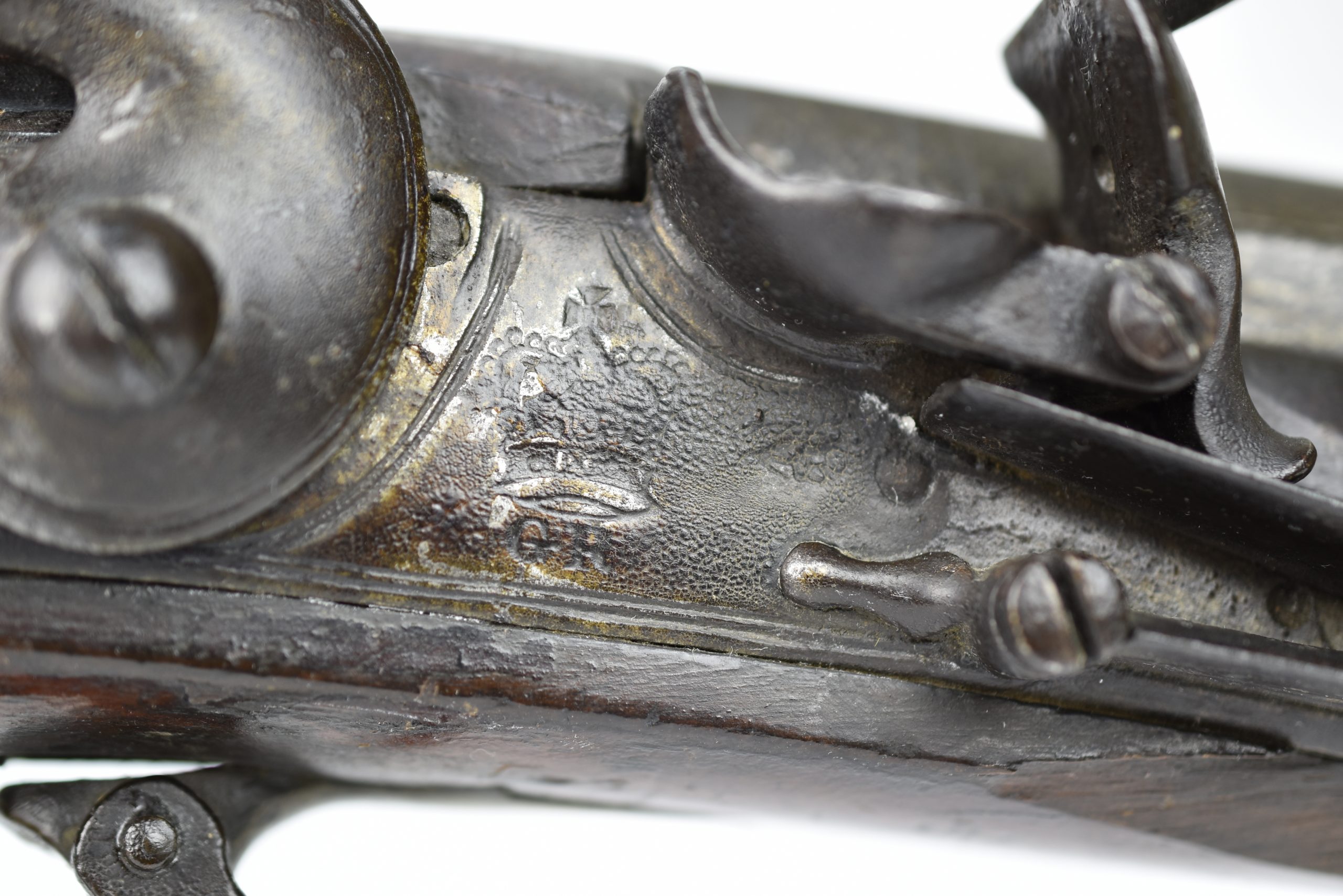 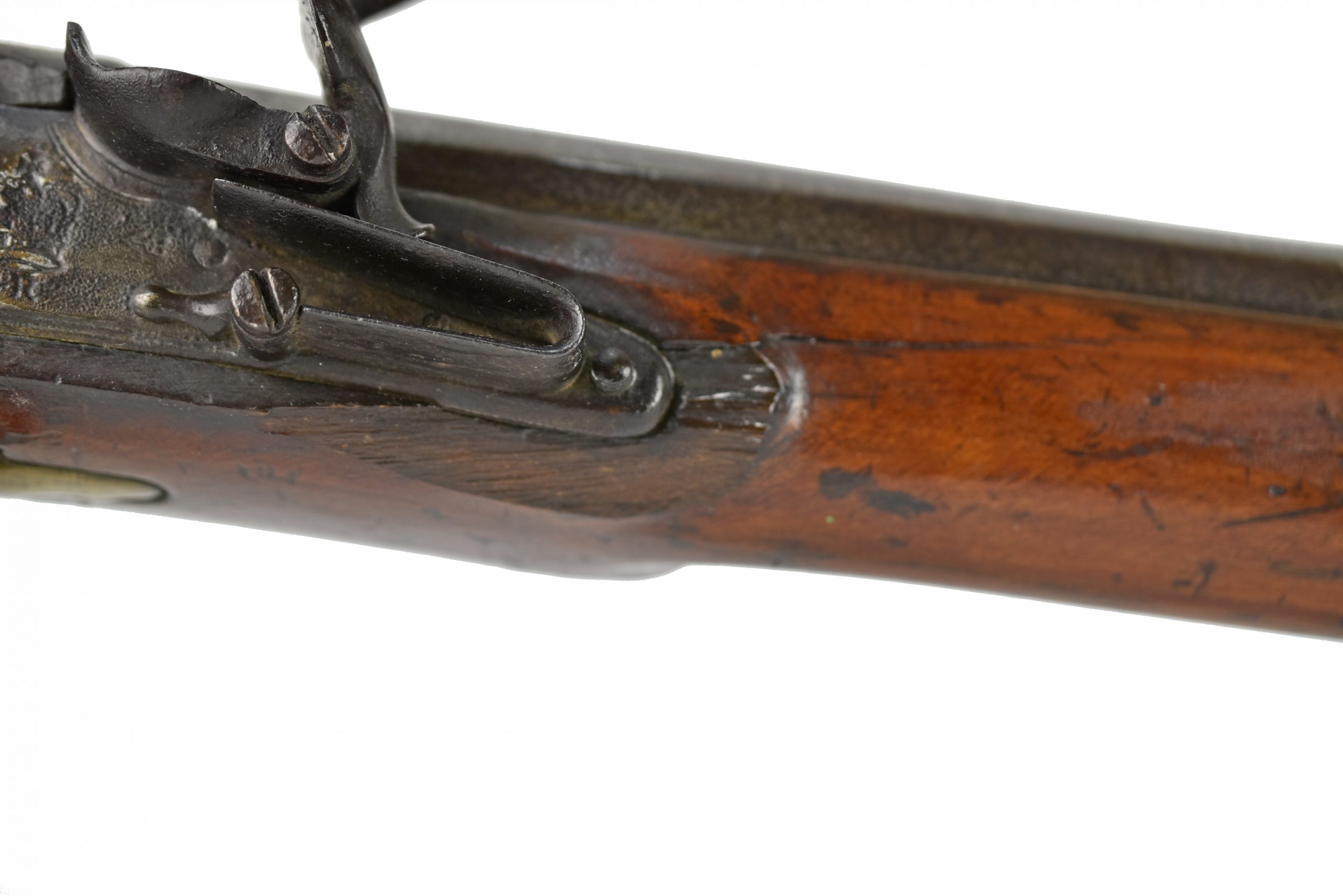 Copyright by Peter Andeweg – Antiques by the Sea – 2020